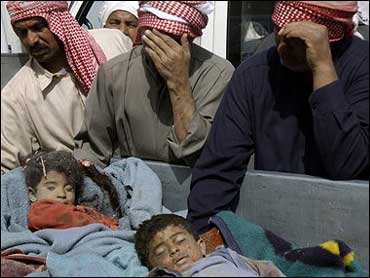 The Iraqi government has rejected the findings of an American military investigation that cleared troops of any wrongdoing in the killing of 15 Iraqi civilians last March.

The Pentagon cleared U.S. servicemen of misconduct Friday, after its investigation into a raid in Ishaqi, a village north of Baghdad.

But, as CBS News correspondent Elizabeth Palmer reports, Iraqi leaders and relatives of those who died in the attack do not believe the Americans' report.

Dramatic video footage from the scene leaves no doubt that civilians, including children, were killed during a raid by American special operations forces. But Pentagon officials say the investigation found the civilians were not killed deliberately, but accidentally during a shoot out with insurgents hiding in a house.

The investigation of the raid in Ishaqi concluded that the U.S. troops followed normal procedures in raising the level of force as they came under attack upon approaching a building where they believed an al Qaeda terrorist was hiding, said Maj. Gen. William Caldwell, a U.S military spokesman.

A ground force conducted the March 15 nighttime raid in the village of Ishaqi, about 50 miles north of Baghdad. After being fired upon from the targeted building, the soldiers pulled back and called in airstrikes by an Air Force AC-130 gunship, which attacked and collapsed the building, two defense officials in Washington said.

One defense official said the investigation into the circumstances of the Ishaqi attack found that four people in the building were killed by U.S. forces, including two women and a child. The main target of the attack, said by U.S. intelligence to be an al Qaeda figure, ran from the building but was later captured, the official said.

But local Iraqis said there were 11 dead, contending they were killed by U.S. troops before the house was leveled, and video footage showed a row of dead children.

The bloody aftermath of the attack was captured at the time in the footage shot by an AP Television News cameraman. The video became the focus of attention Friday when the BBC aired it in the wake of recent allegations of U.S. troops killing unarmed civilians.

The footage shows at least one adult male and four of the children with deep wounds to the head that could have been caused by bullets or shrapnel. One child has an obvious entry wound to the side and the inside of the walls left standing were pocked with bullet holes. A voice on the tape said there were clear bullet wounds in two people.

The video includes an unidentified man saying "children were stuck in the room, alone and surrounded."

"After they handcuffed them, they shot them dead. Later, they struck the house with their planes. They wanted to hide the evidence. Even a 6-month-old infant was killed. Even the cows were killed, too," he said.

In a separate case, as many as 24 civilians were killed in Haditha in November. The incident has sparked two investigations — one into the deadly encounter itself and another into whether it was the subject of a cover-up.

CBS News correspondent David Martin reports that 12 marines went out on patrol. One was killed and two were wounded by a roadside bomb, leaving nine who either took part in or knew about the killings.

They were led by Sgt. Frank Wuterich, who according to one of the wounded marines, was liked and respected by his men, reports Martin.

So far three marines have been relieved of command, reports. One of them, Capt. James Kimber, who says he had nothing to do with Haditha, spoke out in defense of the Marines.

"They're the ones out there doing it every day. I mean every day," he told Martin. "You know, asked to make life and death decisions. They're walking on the knife's edge every single day.

But according to U.S. lawmakers briefed by military officials, the Marines, enraged by the loss of a comrade, stormed into nearby homes in the area and allegedly shot occupants dead as well as several men in a taxi that arrived at the scene of the blast.
In one of the homes, Marines ordered four brothers inside a closet and shot them dead, said the Haditha lawyer, Khaled Salem Rsayef.

Rsayef said he himself lost several relatives in the alleged massacre, including a sister and her husband, an aunt, an uncle and several cousins. He and his brother, Salam Salem Rsayef, spoke to The Associated Press from the Euphrates River town of 90,000 late Thursday and Friday.

As relatives and witnesses, the Rsayef brothers met at least four times with U.S. military investigators looking into the killings. The meetings, they said, began in February and were held at Samarra General Hospital. The time and venue of each meeting were relayed in advance to the relatives by doctors at the hospital, they said.

The next meeting is scheduled for Sunday, the two brothers said, suggesting that the U.S. investigations into the 6-month-old affair are not finished.

Khaled Salam Rsayef identified the four brothers shot and killed in a closet as Jamal Ayed Ahmed, 41, a car dealer; Chassib Ayed Ahmed, 27, a traffic policeman; Marwan Ayed Ahmed, 28, an engineer; and Kahtan Ayed Ahmed, 24, a local government employee. He said the U.S. military did not give compensation payments to their families because the brothers were believed to be insurgents.

Rsayef said his account of what happened was based on his personal observations from the rooftop of his home and windows. His house is only several dozen yards away from the three homes raided by Marines. The killings, which he did not witness in person, were recounted to him and other members of his family the following day by survivors.

He said his own home shook violently when the roadside bomb went off at 7:15 a.m. and that intermittent gunfire lasted for about two hours. He could not go out of his house to see for himself, but managed to steal quick glances from his roof and from behind windows.

"About 5 p.m. I emerged with my family carrying white flags," he said. "We wanted to move away from the area fearing that shooting could resume."

In the third incident, a man was shot in Hamandiya, near Baghdad, in April. The Iraqi was reportedly dragged from his home and killed by U.S. military personnel. The Los Angeles Times and NBC News said troops may have planted an AK-47 and shovel near the body to make it appear the man was an insurgent burying a roadside bomb. Seven Marines and a Navy corpsman could face murder, kidnapping and conspiracy charges as early as Friday, according to a defense attorney.

More than 4,000 Iraqis — many of them civilians — have been killed in war-related violence this year, including at least 936 in May alone, according to an AP count, as civilians, not Iraqi security forces, are increasingly the casualties of violence.