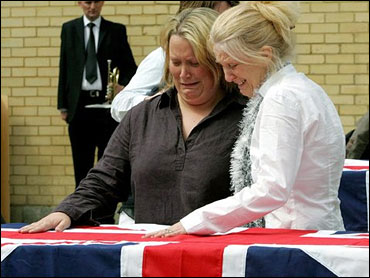 Their bodies were returned to Britain, accompanied by members of their families. Their arrival was honored in a simple, moving ceremony for close family and friends at London's Heathrow airport, their plain wooden coffins draped in the Union Jack.

The two journalists, along with CBS News correspondent Kimberly Dozier, were embedded with the 4th Brigade Combat Team, 4th Infantry Division, doing a Memorial Day story about what life is like for the troops in Baghdad when an explosives-packed car blew up nearby on Monday. Brolan and Douglas died at the scene, along with a U.S. soldier and an Iraqi translator.

Dozier is being treated at the Landstuhl Regional Medical Center in Germany after being wounded in the head and lower body in the attack. She remains on a ventilator, but is awake and alert and has been able to communicate with family and colleagues through notes.

Brolan's wife, Geri, described her husband as "always happy, never down or angry."

"I don't think he would have done anything differently," she said. "He was very proud of what he did."

Linda Douglas, Paul's wife, said between tears that her husband "had that smile, had the ability to light up a room and I'm so going to miss him."

Brolan and Douglas were recalled not just as colleagues, but as friends by CBS London Deputy Bureau Chief Andy Clarke, who flew to Kuwait with the families to collect the bodies and offer support. Douglas' daughter Joanne spoke movingly on behalf of the families, saying they had left as two but come back as one.

CBS News President Sean McManus, who had flown to London to represent the company at the ceremony and offer its condolences and long term support to the mourners told them they would always be a part of the CBS family.

"They died doing what they love doing, and we should take some small consolation in that," McManus told friends and family of both men. "This time James and Paul are not going to home, or a least not in the usual way. This time they're going into each of our homes. This is a family, based on the universal family values of friendship and respect and love."

In a moving tribute to his colleagues, CBS News correspondent Mark Phillipssaid, "We've always amused each other — and maddened each other in this tight little London crowd of ours ... and this is the day we've always dreaded. This was always our unspoken horror. And now it's happened."

Phillips shared endearing stories about working with Brolan and Douglas on the road, from Sarajevo to Pakistan. He recalled Douglas making his way through checkpoints in Lucavica to bring fresh eggs back to his CBS team, who had eaten microwave packaged food for weeks.

"Paul's charm worked because it was genuine. Even the belligerents in an ugly civil would stop shooting because they could see that," Phillips said.

Phillips also remarked on Brolan's work ethic and warm spirit. "I keep thinking of James — his back killing him — climbing that mountain in Pakistan with those mules. Never, never allowing anyone to carry any of his gear. Cracking jokes," he said.

"To their families — and to our friends Paul and James — welcome home," Phillips concluded.

"As sad as it was, it was a very fitting tribute to these two beloved men, and I know they will be incredibly missed," McManus added in a statement.

A public memorial will be held at a later date.