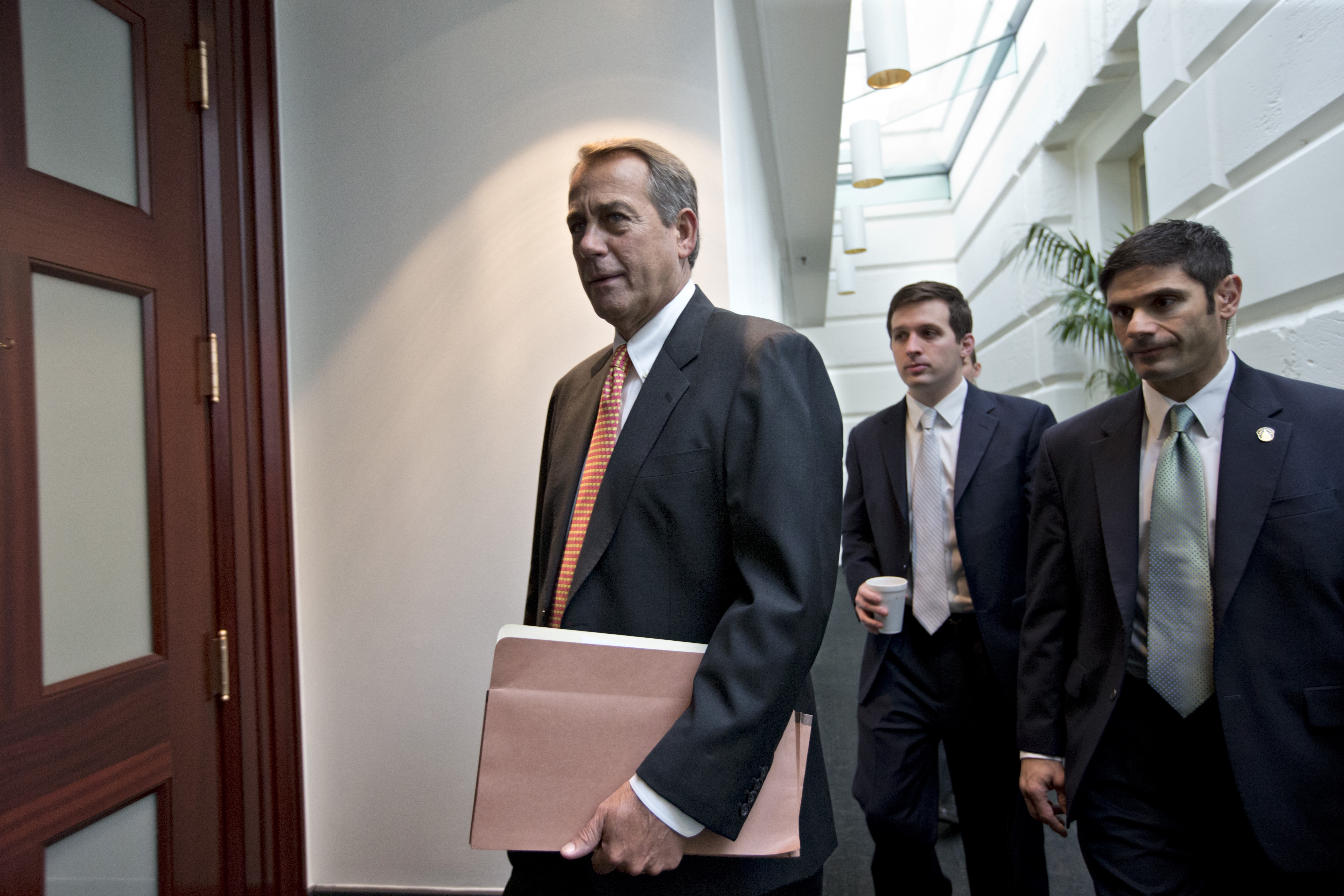 Despite what looked like recent signs of progresson a deal to avert the so-called "fiscal cliff," House Speaker John Boehner signaled today that Republicans and Democrats remain as far apart as ever in the negotiating process -- and is warning his fellow lawmakers that they might have to work through the Christmas holidays.

In a meeting with the House Republican Conference this morning, Boehner told members not to make plans for Christmas, CBS News has learned, and members leaving the meeting said there were no indications from Boehner's remarks that any real progress has been made between the two chief negotiators involved in the process: Boehner and President Obama.

Meanwhile, new information out of the White House suggests that Boehner continues to seek a permanent extension of all the Bush-era tax rates, even while the Obama administration insists that it will not accept such a deal.

The White House sent its most recent offer to the Capitol Monday for a compromise on staving off the "cliff," a series of tax hikes and spending cuts set to go into effect next year. That deal included $1.4 trillion worth of revenue, down from the president's initial $1.6 trillion bid, and Republicans reportedly counter-offered Tuesday. Later on Tuesday, Mr. Obama and Boehner spoke by telephone, which Boehner described on Wednesday as "deliberate."

According to two senior White House officials, the telephone conversation between Mr. Obama and Boehner was very tense, as Boehner continued to ask for a permanent extension of all the Bush income tax rates. According to the officials, Mr. Obama dismissed that position as unacceptable and said he would put forth no counter-proposal until Boehner and House Republicans relented to increase income tax rates on households earning more than $250,000. The next 48 hours, according to the officials, will be critical to the negotiations: If Republicans agree to  higher income tax rates, other issues can be discussed -- including entitlement reforms. But they say they will not entertain any such consideration until Boehner has conceded the point on higher rates.

Boehner spokesman Michael Steel objected to the White House account of the meeting, which he called "deeply misleading." Steel argued the speaker's position continues to be that sufficient tax revenue can be raised through major tax reform next year, and that it doesn't make sense to raise rates for anyone in the meantime. He called the notion that Boehner wants to make the Bush-era tax rates permanent "ridiculous."

As behind-the-scenes talks continue, Republicans say publicly that the president's latest proposal of $1.4 trillion is still far more than they are willing to swallow. The only GOP proposalthat has been made public so far would cut $900 billion in spending and raise $800 billion in revenues, which would be achieved by closing unspecified loopholes and deductions rather than increasing rates.

In a press briefing today, Boehner cast Mr. Obama's plan as "mainly tax hikes" and said it "does not meet the two standards that I laid out the day after the election." The key question, however, is whether or not Boehner is actually open to the idea of raising any rates at all. Despite recent openness by some Republicans to do so, White House press secretary Jay Carney said today there's "no indication yet" Boehner is currently on that page.

"They have refused to accept the fundamental fact that higher-income Americans, millionaires and billionaires, the top 2 percent of earners in America are not going to have their tax cuts extended," he said. "The president has made that clear, and he will not sign a bill that extends tax cuts for the top 2 percent."

Republicans, meanwhile, continue to accuse the president of "slow walking" the nation toward the so-called "cliff" by refusing to yield on the matter.

"The president seems to be walking us ever so slowly towards the cliff," said House Majority Leader Eric Cantor, R-Va., in remarks alongside the speaker today."We're going to stay here right up until Christmas Eve, throughout the time and period before the new year, because we want to make sure that we resolve this in an acceptable way for the American people."

Even while indications suggest a deal is not imminent, some top Democrats say they still believe it can happen before Christmas. In an interview today with "CBS This Morning" House Minority Leader Nancy Pelosi, D-Calif., said she was "optimistic" about the prospects of a deal coming sooner rather than later.

"I'm more optimistic than that," Pelosi said on "CBS This Morning" when asked if the absence of a deal this week would mean it wouldn't get done until after Christmas. "I do think that [House Speaker John Boehner] is a well-intentioned person. He knows what the risk is. Because actually this isn't about us, this is about the American people."

Even so, in a press briefing later in the day, she wondered why Republicans are "just delaying delaying and delaying" that which she predicts to be inevitable.

"What are we waiting for?" she wondered. "Is there a dove that's going to fly in with a message tied to its leg?"

Mr. Obama said yesterday he remains "confident" about the situation.

"I'm pretty confident that Republicans would not hold middle-class taxes hostage to trying to protect tax cuts for high-income individuals," he said in an interview with ABC's Barbara Walters that aired Tuesday night. "I don't think they'll do that."

With less than two weeks left before the Christmas holidays, however, lawmakers from both sides are trying to guarantee their legislative priorities don't get sold out in a deal brokered primarily between Mr. Obama and Boehner.

On the Senate floor today, Majority Leader Harry Reid, R-Nev., kept the pressure on Mr. Obama to demand a hike in tax rates for the nation's wealthiest earners.

"How many times do we have to go through this drill to know that it's an unfair game?" he added.