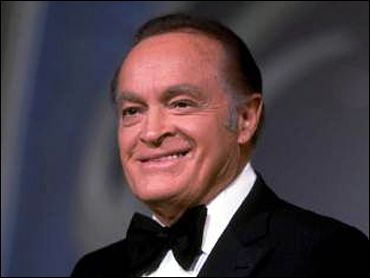 For the better part of the 20th century, Bob Hope became as much an American icon as mom's apple pie.

In small towns, in run down theatres, Hope developed a craft that would allow him to dance rings around Bing Crosby. And even keep up with the fast stepping Jimmy Cagney.

Nothing gave him a bigger thrill than hearing an audience erupt in laughter.

"He loved it. And it just gave him adrenaline that was good for three or four days. In fact, for the week,'' says son Tony Hope, a Washington lawyer.

"I think that he started off his life as a teenager of an image of what he would become. And he became that. And he lived the personality that he created and that he was.''

"You know, the theory is, behind every great comedian is a dark side. And he just didn't have that. He just wasn't that type of guy," adds daughter Linda Hope, a television producer.

"He was just a very spontaneous, happy kind of guy. And I think listening to all that applause and taking in all that positive energy had something to do with that."

In 1933, two big things happened to him. He appeared in the musical "Roberta," which made stars out of Hope and Fred MacMurray, and he met his future wife, a singer named Dolores Reade.

"I was singing 'Paper Moon' at that time, and he said, 'It was love at first song.' It was really wonderful. And we seemed to recognize each other immediately," says wife Delores. "And when I came home that night after meeting him, I told mother, I said, 'I met my husband.'"

It was Hope's genius to recognize a good thing.

The Pepsodent radio show in 1938 also put a bright smile on Hope's face and made him a national figure.

Then Hope appeared in "The Big Broadcast of 1938." This film, which was originally going to star Jack Benny, made Hope a national figure that people could watch as well as listen to.

It also introduced the song, "Thanks For The Memories," which Hope would adopt as the theme song for the rest of his career.

In 1940, Hope's career hit the high road when he teamed up with Bing Crosby to make the original buddy film, "The Road to Singapore."

Initially titled "The Road to Mandalay," it was supposed to star George Burns and Gracie Allen. But the Hope-Crosby combination proved to be irresistible, and they went on to make several road films together.

"Dad and Bing had a special relationship," says daughter Linda. "And then there was the competition with the golf - something they both enjoyed passionately."

"They were golfing every mind they could do. In fact, when they'd have any downtime in the studio, they'd be off to the golf course."

Just how much Crosby's friendship meant to Hope is illustrated in a phone call son Tony had with his dad.

"I had heard on the radio that Bing Crosby had died, and I picked up the phone and called him," recalls Tony. "He was in New York, and I said, 'Do you want me to come up?' And he said, 'No, I've canceled the show.' He said, 'I can't go on. I'm going back to Los Angeles.' And that's the only show in 70 years that I know of him not going out and doing."

Hope felt a deep commitment to his fans, and nowhere was it more obvious than when entertaining the troops which he did for more than 50 years.

But this commitment meant being away from his family for long periods of time. The Hopes had adopted four children: Linda, Tony, Kelly, and Nora. And their dad was always gone on the one day kids love best: Christmas.

But when their dad was home, the children would get a glimpse into his fertile imagination.

"He used to create a character when we were growing up that I just loved. It was a little orphan girl named Bessie," says daughter Linda.

"After a hard day at the studio, he'd come home and we'd all be scrubbed in our pajamas and he would go over to the window and call out there and he'd say, 'Bessie are you there?' and then he'd do a falsetto response: "Hello, yes Mr. Hope, I'm out here.' And then he'd create this whole character, which was really quite charming. And I used to wonder why doesn't Bessie come in? Why doesn't he invite her in?"

Bob Hope made his widest mark on American audiences through television, a medium he helped pioneer.

Over much of the 20th century, he made a mark on the American entertainment scene that will not soon be equaled.

Hope made his last television appearance on November 23, 1996.

"Toward the end of his career, we began to realize that his timing was a little off. And he just started slowing down and eventually packed it in. I think he looked back and realized that he had had one of the most successful showbiz careers in history."