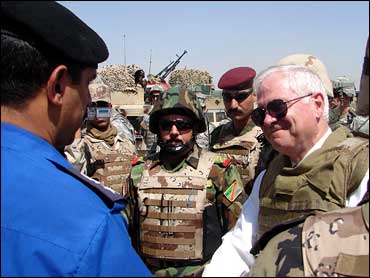 Flowers, candles and pictures of Bob Hope are strewn across his star on the Hollywood Walk of Fame, where fans gathered Monday night to pay tribute to the comic legend who died Sunday night at the age of 100.

As fans stood at the Walk, thinking of what America has lost, they talked of how they will miss the actor and comedian whose style, grace and personality touched millions of people.

"Bob Hope will be remembered for all time," Hatten said.

President Bush said not only did Hope make America laugh, he was a "great citizen." He said Hope "lifted our spirits."

Over the course of a full century - through economic hardship, four wars and civil unrest - Bob Hope kept people looking on the bright side.

"Isn't it strange that he gave everybody 'hope' all the time?" Mickey Rooney reflected Monday. "That meant he was giving himself."

Rooney, who appeared with Hope in the 1953 boxing comedy "Off Limits," said his slope-nosed co-star was always "on," always ready with a story, a quip or a smart remark. "Whenever we'd go before the camera or come off there'd be a joke or a laugh or something. Life was a laugh and a memory for Bob Hope," said Rooney.

In a press conference Monday, Hope's daughter Linda said the comedian died at about 9:30 p.m. West Coast time, surrounded by his family in his bedroom. A priest said Mass in the room, and nurses who had cared for Hope over the years were also there.

"I think all the good vibes he gave off during his lifetime came back to take him up. It's been an amazing life," Linda Hope said. "You couldn't ask for a more beautiful, peaceful time."

Hope had no last words. "He really left us with a smile on his face…He just gave us each a kiss and that was it."

The Hope family plans a private burial and then a public memorial service in a month's time. In lieu of flowers, the family asked that donations be made to the Bob and Delores Hope Charitable Foundation.

"I think the private Bob Hope was very much like the public Bob Hope," Linda Hope said Monday. "He was warm and a lot of fun."

After launching his career in vaudeville, Hope easily transitioned to radio, television and went on to make more than 50 movies. But it was as an entertainer to the troops that Hope really shined. From World War II to the Korean War to Vietnam, he was known for entertaining U.S. troops overseas.

Christened Leslie Townes Hope, the entertainer made his first entrance in Eltham, England, on May 29, 1903, the fifth of seven children. The family emigrated to the U.S. in 1908, settling in Cleveland, Ohio. Hope did not become a naturalized American citizen until 1920.

His father, William Henry Hope, was a stonemason, and his mother, Avis Townes Hope, had been a Welsh concert singer and gave Hope singing lessons.

Hope dropped out of Fairmont High School to become a dancer at Cleveland's Bandbox Theater. He eventually formed his own touring show, which included the act of Edgar Bergen and Charlie McCarthy.

Hope made his Broadway debut in 1927 in The Sidewalks of New York. Many other Broadway shows followed. He made his radio debut the next year on Atlantic Family. He bombed.

"I tried to do a relaxed show format like Jack Benny, but it wasn't right for me," Hope told Time magazine in 1967.

Eventually, he got his radio act down. The Bob Hope Pepsodent Show premiered Sept. 27, 1938, with what became his signature song, Thanks for the Memory, as the theme song.

That radio program, broadcast on Tuesday nights, became so popular throughout the country that the Wednesday morning Dow Jones stock ticker carried the best jokes from the night before.

Hope's famous ski-jump nose made its feature film debut in 1938 with The Big Broadcast. His first big hit was The Cat and the Canary (1939), in which he co-starred with Paulette Goddard.

Years later, Hope took to the small screen, becoming a regular on television's Chesterfield Sound Off Time, which debuted in October 1951. Hope hosted the Colgate Comedy Hour during the 1952-53 season. From 1963-67, he hosted - and occasionally starred in - Bob Hope Presents the Chrysler Theater.

Hope's best-known work, however, was not for film or broadcast or in America, but for U.S. troops overseas. His lifelong relationship with the U.S. military began even before the country entered World War II. Beginning in March 1941, his weekly radio broadcasts originated from military bases both in the U.S. and abroad.

Until age and ill health overtook him, Hope never stopped visiting troops, from World War II to Korea to the Persian Gulf.

"He realized that this was a fabulous audience. These guys were starved for humor. They were away from their family and friends," Linda Hope said. "It got to be a very personal thing for him and he was absolutely committed to being there for them."

Phyllis Diller often accompanied him on his wartime tours to be the butt of his jokes as he compared her aging, skinny frame to the curvaceous beauties brought along for eye candy.

In a statement, Secretary of State and former General Colin Powell, who saw Hope perform in Vietnam in 1968, called him "a friend to every American GI for over 50 years."

The role earned Hope acclaim, but also controversy. His hawkish stand on the Vietnam War, his jokes about the demonstrators as lunatic fringe, tarnished his image, at least among those under 30.

But in the end, the controversy fell away, and even the Secretary-General of the United Nations was inspired to pay tribute to Hope's accomplishments. Kofi Annan offered his thoughts about the comedian Monday: "I never met him, but he was a great man and he made lots of people happy."

Hope also won the prestigious Peabody Award in 1950 for a four-part radio documentary on atomic energy, which was produced by the legendary Fred Friendly.

Shortly before his 95th birthday, Hope was presented with an honorary knighthood, presented by the British ambassador on behalf of Queen Elizabeth.

Hope married Dolores Reade in 1933, a union that lasted until his death. Together, they adopted four children: Linda, Tony, Nora, and Kelly.

Hope had files of more than 7 million jokes stored in two vaults in the bungalow office located at his home in Hollywood. He arranged to donate to the Library of Congress his personal papers, joke files, photographs, and other memorabilia from his 70-year career.

The king of one-liners had characteristically witty and to the point thoughts on where to take his final rest. Linda Hope says when her father was asked where he wanted to be buried, he said, "Surprise me."

Behind the scenes of "Being the Ricardos"