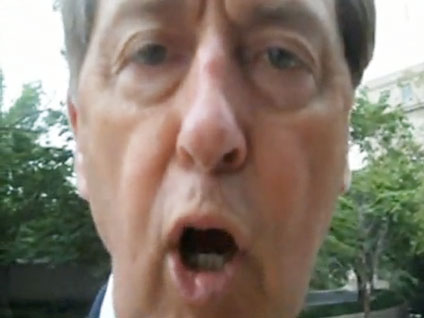 RALEIGH, N.C. (CBS/AP) Democratic Rep. Bob Etheridge is sorry he lost his cool when two young men approached him in Washington, D.C. with a video camera, and asked if he supports President Obama's agenda.

The North Carolina congressmen said in a statement he regrets his reaction and apologizes to all involved.

The video, seen here on YouTube, was posted Monday on sites owned by Andrew Breitbart, the Web entrepreneur who also released the damaging video of ACORN workers counseling actors who posed as a pimp and prostitute.

In the Etheridge video, two men, who identify themselves as students, ask the congressman if he supports the Obama agenda. A visibly agitated Etheridge quickly replies, "Who are you?"

He repeats the question and appears to swat the camera with his hand. The two people don't answer the question, saying they were "just here for a project."

"I have a right to know who you are," Etheridge says, holding one man's wrist.

The pair, again, refuse to tell him. Etheridge then grabs the self-described student by the neck and pulls him next to him.

Etheridge eventually lets go of the young man and walks away.

"Bob Etheridge has lost it," National Republican Congressional Committee spokesman Jon Thompson said in a statement obtained by CBS News' Blog "Political Hotsheet." "His conduct is unbecoming of a member of Congress. It's bad enough that he's joined Obama's assault on North Carolina jobs, but his physical assault on a college student goes beyond the pale."

The person who posted the video on YouTube goes by the name "DCCameraGuy," but is not identified beyond that. You can see what appear to be the two unedited videos here.  The caption below is YouTube's.