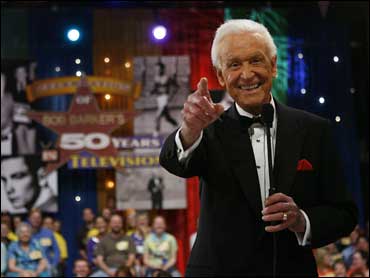 Fans camped outside CBS Television City this week for the chance to say goodbye to daytime TV legend Bob Barker.

"If they offered me $10,000 for my ticket, I'd say take a hike. This is the chance of a lifetime," said Philip Barrett, 24, of Tampa, Fla., who was first in line to attend Barker's finale on Wednesday.

Barrett traversed the country to claim his spot on Saturday afternoon and was then joined by hundreds of others who hoped to see the silver-haired Barker tape one of his farewell shows after 35 years as host of "The Price Is Right."

"I'm here because I need to kiss Bob," said Melanie Zepeda Velez, 32, who traveled from Alberta, Canada, for the event.

These are the die-hard fans: the kind who feign illness to stay home to watch Barker and his Beauties, whose cell phones play the show's theme song, or who have TVs in their bathrooms along with transparent shower curtains.

Like his fans, Barker is also feeling wistful about saying goodbye after three and a half decades.

"It's been a lot of fun," Barker told The Early Show national correspondent Hattie Kauffman last month. "And it's tough leaving this show, because it has been a hit from day one. We've had 35 years never worrying about ratings, always right up on top."

Most of the fans requested tickets to one of the final shows months ago, but that did not ensure their admission, network spokeswoman Cindy Marshall said.

To see photos of highlights of Barker's career, click here.

CBS mails more tickets than its 325-seat studio can accommodate, and fans who want a seat need to get in line early.

About 75 fans were cocooned in sleeping bags and blankets along the avenue next to the studios Monday night.

Strategies for winning flew through the line. Hopeful contestants studied pricing charts and how best to drop a Plinko chip on the $10,000 space. Some said you needed to spin the Showcase Showdown wheel very hard. Still others debated how to impress producers in the 15-second interviews used to select contestants from the audience.

2"They're looking for someone who's not going to get flustered, who will be enthusiastic and a good promoter of the show," said Zepeda Velez.

"What's special about The Price Is Right?'" pondered Beth Chouchaira, 43, who drove from Kansas City, Mo. "I think it's just that common people have the opportunity to win the prizes."

Exuberant fans have always been part of "The Price Is Right," which selects about 12 audience members in each show to play for prizes ranging from a grandfather clock to lavish vacations and car packages.

Barker's long run on the show has also created fan traditions. Most female contestants kiss him on his right cheek. Members of the military wear their uniforms. There is also the 83-year-old Barker's trademark signoff — "Have your pets spayed and neutered" — a tribute to his favorite cause and now a fan mantra.

"I want to hear when Bob Barker says it for the last time," Barrett said. "The audience is going to lose it. I get teary-eyed just thinking about it."

For those on the sidewalk, then, sleepless nights amid helicopter lights and ambulance sirens were not too high a price to pay. Having come directly from the airport, many made themselves at home with tents and food bought at the nearby Kmart. Their sightseeing consisted of looking for Barker's star on Hollywood Boulevard and noting expensive cars on the street.

"We've seen so many limos, Corvettes," said Amy Isenhower, 28, a music teacher from St. Lucie, Fla. "We kind of call out the prices as they go by."

There were also rumors that Barker's last show would feature a rare million-dollar prize or that every audience member would be given a car.

But they were not there for the winnings, the fans said. They were there only to honor their favorite host, a consummate gentleman in a dignified suit.

"I'd rather win a couch from Bob Barker than a million dollars from Howie Mandel," said Mark Dub, a NASA engineer who flew from Houston for the final show. "He's part of American culture."

Barker isn't sure how he'll soon feel waking up in the morning and not having to go to work.

"That's exactly what worries me," Barker responded. "[But] I want to leave while I'm still wanted. I don't want someone to come and say, 'Don't you think it's about time you leave?'"

His final show is slated to air on June 15 at 11 a.m. ET. The episode will then be rebroadcast that same evening at 8 p.m. ET, leading into The 34th Annual Daytime Emmy Awards. Repeats of The Price is Right with Barker will air all summer.

His replacement has yet to be announced.