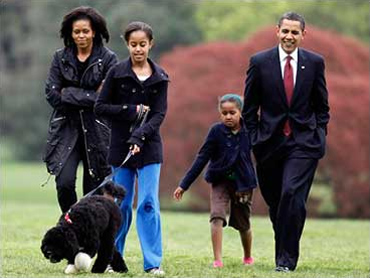 (AP Photo/Charles Dharapak)
The entire first family came out to the South Lawn for the debut of their six-month old Portuguese Water Dog, Bo this afternoon.

Each of the family members took turns petting the black puppy with white paws.

"Here he is, the newest addition to the family," the president said in an introduction adding that "we all have to take turns walking the dog" – famous last words for parents of puppies.

"It is spectacular and well deserved," President Obama said of the press coverage the dog is getting, "he is a star, he has star quality."

Asked where Bo will be sleeping, the president said they have a couple of spots but "not in my bed,"

"We want to make sure that we are responsible dog owners and everyone else is too," the president also said.

The only concern the family has, the president explained, is that apparently Portuguese Water Dogs like tomatoes. "Michelle's garden is in danger," he said.

"He doesn't know how to swim," Sasha added.

Before the family walked back across the lawn with Michelle holding Bo's leash, Mr. Obama said "we are very pleased with Bo." They all played around with the puppy in front of the fountain while the girls followed.

Bo seems to be adjusting well to his new home. He ran in spurts trailing whichever Obama was lucky enough to hold his leash.

Inside Info On The "First Puppy"

Humor: An Interview With Bo