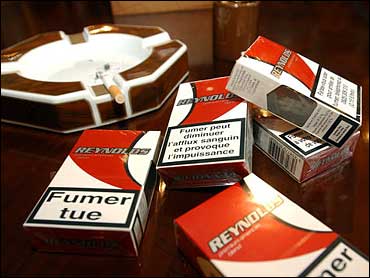 Warning labels on cigarette packs have not significantly dented the French passion for smoking. But now, new regulations requiring much larger labels are confronting smokers with the simple message: "SMOKING KILLS."

The hard-to-ignore labels - warning of heart attacks, lung cancer, impotence, aging skin and harm to children - began appearing this week and are the result of tough anti-smoking regulations adopted in the European Union to discourage tobacco consumption.

The regulations, adopted by the EU in 2001, require tobacco companies to cover more than a third of cigarette packs sold in the 15-nation bloc with bold health warnings.

They also require tobacco companies to cut levels of tar and nicotine, list all ingredients, and ban terms such as "mild," "light" and "low tar" that suggest less harmful effects.

Not everyone likes the idea.

"It's becoming ridiculous," said Dominique Lebreton, who runs a tobacco shop in Paris and criticized the measure as government meddling.

The labeling "is just ugly," said Paul Lefelman, 26, a pack-a-day smoker for six years who maintains the warnings will not influence him to cut back.

According to the new rules, general health warnings, such as "Smoking kills," must now cover at least 30 percent of the front of cigarette packs. At least 40 percent of the pack backs must carry labels with more specific cautions, such as "Protect children; don't make them breathe your smoke," "Smoking causes fatal lung cancer," or "Smoking may reduce the blood flow and cause impotence."

The regulations also restrict nicotine to 1 milligram per cigarette and carbon monoxide to no more than 10 milligrams. Until now, there have been no restrictions on either.

The new warnings replace smaller ones that covered only about 4 percent of the front and back of the pack. Those warnings failed to put a major dent in the passion for smoking in France, where about a third of the country's 48 million adults smoke. About 80 billion cigarettes were consumed in France in 2002, compared with about 83 billion a year earlier, according to France's Center for Documentation and Information on Tobacco. Some 66,000 people died of smoking-related diseases in France in 2002.

Jean-Paul Truchot of the Federation of Tobacco Industries said the new cigarette packs are starting to appear in stores and that by September, delivery of the old packs will stop.

"If every time I take out a cigarette and see the warning, maybe that will help me," said Marie Jo, a 22-year-old receptionist who has been smoking 10 to 15 cigarettes a day for more than three years. "The bigger it is, the more you realize."