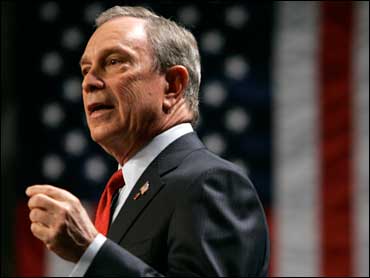 After two years of playing coy about his presidential ambitions, Mayor Michael Bloomberg declared in a newspaper editorial Wednesday that he will not run for president but might support the candidate who "takes an independent, nonpartisan approach."

The 66-year-old billionaire businessman, who aides had said was prepared to spend $1 billion to run as an independent, wrote in an editorial on The New York Times' Web site that he will work to "steer the national conversation away from partisanship and toward unity; away from ideology and toward common sense; away from sound bites and toward substance."

On Thursday, Bloomberg said that the No. 2 job is not an option either.

"Nobody is going to ask me to run as vice president," he said at a news conference.

Said Bloomberg: "I've had a wonderful opportunity to influence the dialogue. ... I've said repeatedly when people focus on New York City and the mayor, it's good for New York City."

Bloomberg, who has almost two years left in his second term at City Hall, had publicly denied any interest in running for president since one of his political advisers first planted the seed more than two years ago.

But his denials grew weaker in recent months as aides and supporters quietly began laying the groundwork for a third-party campaign.

"I listened carefully to those who encouraged me to run, but I am not - and will not be - a candidate for president," he wrote.

Among his biggest obstacles was getting on the ballot. The process varies wildly from state to state and would have required Bloomberg to collect hundreds of thousands of signatures according to a strict timetable on which the first key date is March 5.

Beginning next Wednesday, a Bloomberg campaign would have had to begin gathering signatures to get on the ballot in Texas, which has one of the earliest deadlines.

Bloomberg underwent extensive preparation for a presidential bid. The work included mass polling and nationwide data collection to determine his viability as a candidate, as well as detailed study and preparation for a state-by-state ballot access drive.

Aides and associates had said in recent days that Illinois Sen. Barack Obama's rise in the Democratic contest against New York Sen. Hillary Rodham Clinton was increasingly diminishing the chance that Bloomberg would run.

"In citing the 'current campaigns,' Bloomberg is acknowledging there is no opening for a candidate who would seek a plurality of voters in the broad middle of the political spectrum," said CBSNews.com senior political editor Vaughn Ververs. "With presumptive GOP nominee John McCain and Democratic front-runner Barack Obama, there is no void in the center for him to fill." (Read more analysis on Bloomberg from Ververs)

In the Times editorial, Bloomberg wrote that while he is not running, the race is too important for him to stay completely out.

"And so I have changed my mind in one area," he said. "If a candidate takes an independent, nonpartisan approach - and embraces practical solutions that challenge party orthodoxy - I'll join others in helping that candidate win the White House."

Putting his endorsement - and wealth - behind one of the candidates could make a significant difference. And Bloomberg, a Democrat-turned-Republican-turned-independent, has ties to Obama, Clinton and Republican Arizona Sen. John McCain.

Last November, Bloomberg and Obama met in Manhattan for a highly publicized breakfast, and the mayor has praised some of Obama's positions, such as supporting merit pay for teachers.

He also has worked closely with Clinton, his home state senator, and has a friendly relationship with McCain.

"This business of Ralph Nader being a spoiler - you know, in any three-way race, two of the three are going to be spoilers," Bloomberg said. "Come on. Everybody's got a right to do it - you're not spoiling anything."

Bloomberg's friend and political ally California Gov. Arnold Schwarzenegger has endorsed McCain, and the senator said during a Republican debate that Bloomberg had done "remarkable things" with the city's education system, the nation's largest.