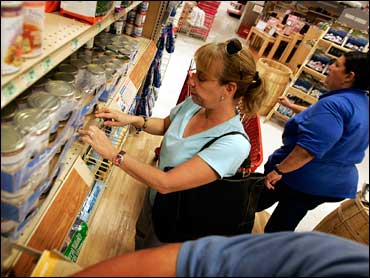 Kadeeja Zunatto is practicing hard four days a week because she's a girl with a dream.

"To be in the Olympics, winning the gold in solo, duet and team," says Zunatto.

At the age of 10, Zunatto has been a synchronized swimmer for three years.
She is a member of the beginners Aquamaids team in Santa Clara, Calif. Like others her age, she has the time to train and nurture her Olympics ambitions.

After 20,000 hours of practice, she might earn a membership on the Santa Clara Aquamaid National Team. And from that group, the United States Olympic team will pick contestants to represent the nation.

"Synchronized swimming is demanding because it's a long-term proposition," says Chris Carver, the coach of the last two U.S. Olympic team. "It really takes at least 10 years to become a world-class athlete.

An Olympic training squad practices about eight to 10 hours a day, six days a week.

But if you think the big production numbers in those old Esther Williams movies are synchronized swimming, think again. The Aquamaids politely call that "water ballet."

The swimmers say synchronized swimming is a combat sports, and they have the bruises and broken bones to prove it.

So, as athletes, the Aquamaids have to be tough as nails. They get that way from their training.

First, they swim laps for thousands of miles — literally.

"They fly through the air before they go into the water, and this way it's a little safer for them," says Radunzel. "They don't have to hit the water over and over again."

Besides all the time spent building endurance in the water, the Aquamaids run land drills to rehearse their routines.

"It helps translate the muscle memory a little bit into the water," explains fellow Aquamaid, Loren.

Then it's over to Stanford University several times a week to work with coach Don Chu on plyometrics.

The object is to get strong without developing bulky muscles.

"They have to have a long lean look in order to survive in the eyes of the judges," explains Chu.

As individuals, they must be in peak shape. But they must work as a team to be competitive. The Aquamaids work on endless team drills to achieve the synchronization they need. For that reason, the team is the first group picked for the Olympics squad because of all the training it undergoes.

Every part of synchronized swimming has to be done in unison, and it's not just the unison of the obvious movement that you see, but the technique that's underwater. The power comes from below the water.

However, years of hard work don't guarantee a spot in competition. The heartbreaker of being an Aquamaid is that the team calls for only eight swimmers and 13 are training.

Even with two alternates, that still mean some girls who've sacrificed everything won't make the cut.

"It's a definite stress on the team because, you know, definitely over the months we've bonded as a team," says Becky. "It's also difficult because we're training all together and trying to build a team, but at the same time we're competing against each other."

Making the cut was already a worry for Tammy Crow. She broke her arm badly in a car accident in mid-February. She had surgery and wears an item that stimulates bone growth. She does what she can to hang with the team.

"I've been on the team the last three years, swimming both programs," says Tammy. "So as long as I can get back to where I was before, and hopefully improve a little bit, there's still a chance for me to make it back there."

And then there's Bill May, who never had a chance of making the Olympic team. He has won nationals in the solo competition several times and is one of the best in the world. But the Olympics define synchronized swimming as a women's sport.

May trained for years, hoping that by 2004, the rules would change. But a recent challenge to the "women only" rule failed.

May and his partner Cristina Lum, who was on the 2000 Olympic team, are hoping to go to the 2004 Olympics and do an exhibition of mixed pairs.

So, their steamy routine may be a first glimpse at a brand new Olympic sport.

John Stamos: "This is a great moment"
Thanks for reading CBS NEWS.
Create your free account or log in
for more features.
View CBS News In
CBS News App Open
Chrome Safari Continue
Be the first to know
Get browser notifications for breaking news, live events, and exclusive reporting.