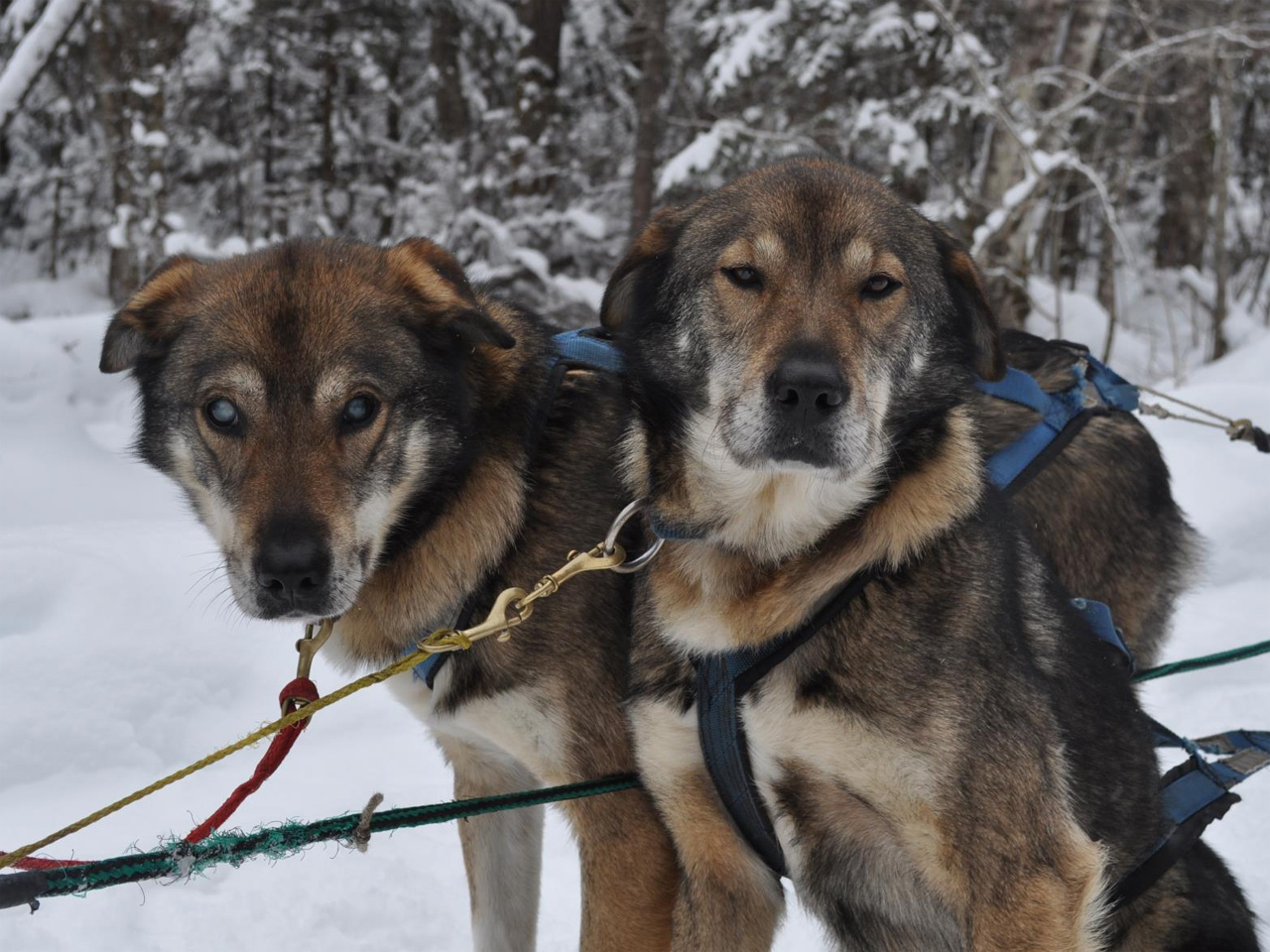 JEFFERSON, N.H. When Gonzo started tripping over his food dish three years ago, no one could explain or stop the Alaskan husky's quickly advancing blindness. But a veterinarian offered some simple advice: "Run this dog."

Gonzo, one of 120 dogs at Muddy Paw Sled Dog Kennel, was happy to comply. With help from his brother, Poncho, he soon resumed his place pulling a sled all over New Hampshire's North Country to the delight of tourists and his caretakers, who quickly realized that if Gonzo didn't treat his blindness like an obstacle, neither would they. Given the dog's obvious eagerness, he was allowed to continue on as usual.

"Even though he's blind, he still knows when hook-ups are happening. He's still very aware," said kennel manager Ben Morehouse. "When you have a dog such as Gonzo, with such a want and a drive and a desire ... you try it, you hook up, you see what happens."

A frenzy of excited barking engulfs the kennel whenever Morehouse and other staffers haul out a sled. The chosen team is outfitted with harnesses and booties; those left behind scramble onto their doghouse roofs and howl. Gonzo and Poncho are lined up side-by-side, usually toward the back of the eight-member team — "brains to brawn" is how Morehouse describes the order.

"A lot of people say everything about dog sledding is efficiency. Gonzo and Poncho are not the most efficient sled dogs out there. They won't set a speed record, they won't pull the most you've ever seen," Morehouse said. "To be honest, they're probably some of the goofiest dogs you can put in harness. But they're just fun."

Some dogs at the kennel, including Gonzo and Poncho, were born there. But it's also home to what kennel owner Neil Beaulieu calls "second-chance" dogs — former professional sled dogs a bit past their prime — as well as dogs rescued from bad situations.

The barking continues as the dogs pull away from the kennel onto a snow-packed trail. Within a few minutes, however, they settle into a nearly silent rhythm, the sled's runners skimming through the woods. While the other dogs look straight ahead, Gonzo often lifts his head up and to the right, using his hearing and sense of smell, said Karen Tolin, who has worked her way up from volunteer "poop scooper" to business partner in the years since she first came to Muddy Paw.

When Gonzo first went blind, Poncho didn't treat him any different, she said. But then he realized his brother needed help.

"At first, he'd be a little bit nervous when Gonzo would lean into him. And then somehow — I don't know how dogs communicate — he learned that he was utilizing him to determine where the turns are and how fast they were going. And he would let him do that — he wouldn't get as grumbly as he did in the beginning."

Usually if a dog trips, the others just keep going, Morehouse said.

"I've never seen it with any other dog," he said. "There's definitely a bond there and communication beyond what we do with the two dogs, between the two of them themselves."

Beaulieu describes a spring day when he took the pair for a ride on a trail known for its deep snow, and Gonzo strayed to the edge of the trial and stumbled. With the team still moving forward, Poncho reached over, dug his head in the snow and pulled his brother out, grabbing his harness with his teeth.

"He essentially picked him out of the powder ... threw him back on the trail and never skipped a beat," Beaulieu said. "I've run dogs in a lot of places, all over the country, and it was the most amazing thing I've ever seen sled dogs do."

Beaulieu, a high school teacher, was living in Alaska 10 years ago when he volunteered to help out with the famed 1,000-mile Iditarod dog sled race. He was taking care of a team of dogs after their owner dropped out of the race, and somehow got talked into giving them a permanent home after the woman told him she never wanted to see a sled dog again.

Beaulieu grew up in Maine and had worked as a registered Maine Guide for more than a dozen years before heading to Alaska to teach. He knew nothing about sled dogs when he acquired his first team, but ended up starting his own business after moving to New Hampshire and helping a friend who ran tours from a local hotel.

"I had fun with it. I didn't think I would, but I did," he said. "And the dogs absolutely loved all the socialization and belly rubs and meeting all kinds of new people."

Sled tours range from 20-minute trips from the Mount Washington Hotel in Bretton Woods to a 50-mile overnighter billed as the "Longest Dog Sled Ride in the Northeast." Money from the tours help support what Beaulieu says has become a main focus — finding loving homes for dogs that might otherwise be killed.

"It's become much more than just a sled dog kennel," Beaulieu said. "A lot of shelters deem sled dogs unadoptable, and they put them down. For myself and the entire crew here, we know that's false. They are very adoptable."

Sled dogs do best with active families, he said, but that could mean regular hikes and long walks — not necessarily full-throttle running adventures. The kennel staff offers training in running, skiing and biking while hitched to a dog. Adoptive families are given phone and email support.

"Every time I run these dogs, whether it's Gonzo or anybody, I'm still in awe of the ability of these animals," Beaulieu said. "It's just amazing."