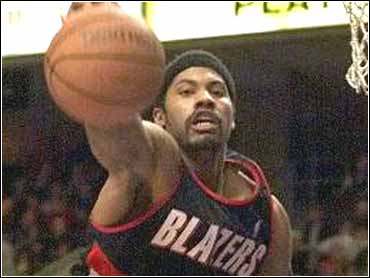 Best record in the NBA? Yeah, the Philadelphia 76ers still have that.

Best team in the league? No way. Not with the way they were manhandled by the Portland Trail Blazers on Wednesday night.

Damon Stoudamire thoroughly outplayed Allen Iverson, Rasheed Wallace found a way to get his shot over the league's leading shot-blocker and the Trail Blazers extended their winning streak to nine games with a dominating 93-75 victory Wednesday night.

"The way we came into the locker room afterward, it was an empty feeling like it was our last game of the season," Philadelphia's Aaron McKie said.

Pretty strong words after a mid-January game, but that's exactly how deflating this loss seemed to be to the Sixers.

What was expected to be a closely contested game between the teams with the league's two best records wasn't even all that competitive. Portland (26-11) scored 16 of the first 19 points, easily fought off a pair of runs by Philadelphia (25-9) and dealt the Sixers a humbling defeat that ended their winning streak at seven.

So lopsided was the contest that the Sixers' sellout crowd just their third of the season despite the team's terrific start started heading for the exits with just under six minutes left.

The Blazers never trailed, passed the ball splendidly in accumulating a season-high 34 assists and outscored the 76ers 23-10 in the fourth quarter to avenge a 13-point loss earlier this season.

Stoudamire scored the first five points of the fourth quarter to give the Trail Blazers a double-digit lead they wouldn't relinquish. He finished with 17 points, 11 assists and five rebounds and played great defense on Iverson, holding Philadelphia's leading scorer to 12 points on 5-for-21 shooting.

Wallace added 18 points, 10 rebounds and four assists matched against Theo Ratliff, the league's leading shot-blocker who was able to manage only one rejection.

"Theo's long, I'm pretty long too, but the best way to attack a shot-blocker is to go right at his body," Wallace said.

Stoudamire took a bit of a slap at the Sixers by predicting that the game against the Hornets would be Portland's most difficult on this trip, and he may have been right. With Portland's defense frustrating the Sixers and its offense providing the big early edge, the Blazers controlled things throughout.

Iverson looked nothing like the team-first player he was the previous night in New Jersey. Repeatedly dribbling into traffic and trying to take on two or more defenders by himself, Iverson shot just 3-for-13 in the first half.

Iverson was more willing to play 5-on-5 in the second half, but his teammates weren't in sync. McKie missed 10 of his first 12 shots, including his first four of the third quarter, while the Blazers were shared the ball well and hit their shots.

A wide-open jumper by Shawn Kemp gave the Trail Blazers a 68-57 lead with 2:26 left in the third, and Stoudamire started the fourth quarter with a jumper over Iverson and a 3-pointer to make it 77-65.

Portland's lead eventually got as high as 20.

"They're a good team, but we were more prepared for them this go-around," Davis said. "The first time (the Blazers played Philadelphia) was early in the year and we weren't in any kind of sync. Tonight was a good test for us because we were on a nice winning streak and they were too.

"What we had to do was contain Iverson and nolet other guys have big nights. When they played us in Portland, their role player-type guys really hurt us."