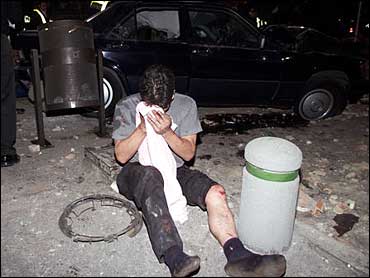 Mayor Antanas Mockus said it was unknown whether the explosion in the El Nogal Club — frequented by politicians and business executives — was caused by a bomb or something else. Leftist rebels have recently begun bringing their four-decade war from the countryside into the cities.

"It was a huge explosion. I thought an airplane had crashed outside," said Luis Moreno, who lives across the street from the club on Seventh Avenue. The explosion blew out walls of two stories of an interior parking garage at the club, raining rubble onto the street below.

"We were having dinner when the bomb went off," a man, his face blackened from smoke, said as his wife was carried away on a stretcher by paramedics. Scores of people stumbled from the wrecked building, many with their faces streaked with blood.

Black smoke poured from the building, and flames licked out from upper windows. Local media reported that people were still trapped inside.

Rescuers rushed to the scene, and paramedics could be seen giving CPR to a man lying amid the rubble.

Catalina Ortiz told Radionet that she was driving with her daughter and husband on the main street in front of the club when she thought her car had been hit.

"When I looked back, I saw the club was on fire, with a ball of fire coming out of the third or fourth floor," Ortiz said. "While I was looking back, things began to fall out of the building."

Nearby buildings were also damaged in the explosion, authorities said.