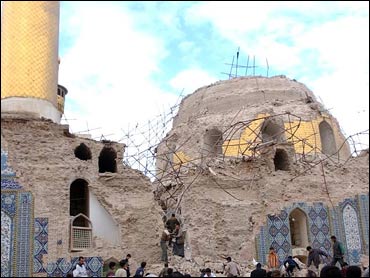 A large explosion early Wednesday in Samarra heavily damaged the 101-year-old golden dome of one of Iraq's most famous Shiite religious shrines, sending protesters pouring into the streets. It was the third major attack against Shiite targets in as many days.

Police believe an unknown number of people may have been buried under the debris from the 6:55 a.m. explosion at the Askariya mosque. The shrine contains the tombs of two revered Shiite imams, both descendants of the Prophet Muhammad.

Tradition says the shrine, which draws Shiite pilgrims from throughout the Islamic world, is near the place where the last of the 12 Shiite imams, Mohammed al-Mahdi, disappeared. Al-Mahdi, known as the "hidden imam," was the son and grandson of the two imams buried in the Askariya shrine.

Shiites believe he is still alive and will return to restore justice to humanity. An attack at such an important religious shrine constitutes a grave assault on Shiite Islam at a time of rising sectarian tensions in Iraq.

National Security Adviser Mouwafak al-Rubaie said armed men wearing special forces uniforms broke inside the shrine and seized the guards, including policemen, responsible for protecting the site. The gunmen planted the explosives and fled, he said.

In an interview with the Al Arabiya television network, Al-Rubaie blamed extremists represented by the al Qaeda terror network and the Sunni militant group Ansar al-Sunnah for the explosion, which he says are intended to "to pull Iraq toward civil war."

"This criminal act aims at igniting civil strife," said Mahmoud al-Samarie, a 28-year-old builder who was among the crowd in this city 60 miles north of Baghdad. "We demand an investigation so that the criminals who did this [will] be punished. If the government fails to do so, then we will take up arms and chase the people behind this attack."