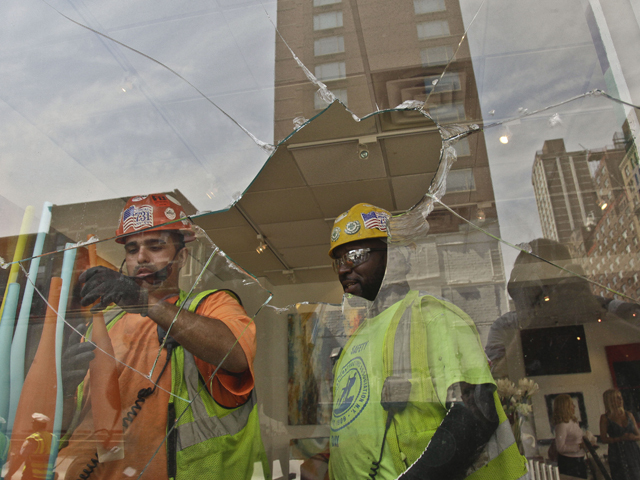 (AP) NEW YORK - Blasting at the construction site for a new subway line shattered windows and sent smoke billowing up to the street on Tuesday, but no injuries were reported.

Metropolitan Transportation Authority spokeswoman Marjorie Anders said something went wrong as contractors were blasting a tunnel for the Second Avenue subway at about 1 p.m.

Officials were trying to figure out what happened at the construction site, beneath East 72nd Street and Second Avenue.

A vacate order was issued as a precaution for the ground floor of one building that had several windows blown out, said Tony Sclafani, spokesman for the city's buildings department.

The Kolb Art Gallery, which sells custom paintings and furniture, is located on the ground floor. Workers were removing pieces of art off a desk in the gallery after the blast.

Diana Mighiu, an employee at the gallery, said flying rocks flew through the door after the explosion, which damaged some store merchandise, including lamps and vases.

"The cement floor broke and went up in the air. We saw all this smoke," she said. "It was really scary."

There was no structural damage to any surrounding buildings, Sclafani said.

Venancio Arvizo, a worker at a cafe near the construction site, said that blasting was common at the site, but the explosion Tuesday afternoon was much louder than usual.

"It shook the entire building," he said. "The windows shook and shattered. It shot up almost like a volcano out of the street."