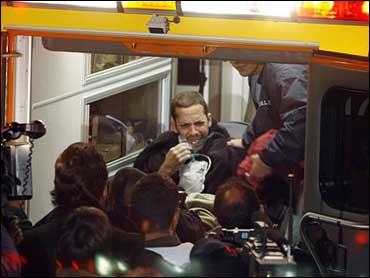 Magician David Blaine left the hospital Tuesday where he had been admitted for observation after being submerged in an 8-foot fish bowl with an oxygen mask for a week followed by a 7-minute breath-holding stunt.

Rescue divers jumped into the 2,000-gallon saltwater tank Monday night and hauled up the magician as he struggled to break a breath-holding record of 8 minutes, 58 seconds. Blaine, who had spent some 177 hours under water, went without air for 7 minutes, 8 seconds as a finale to his endurance stunt.

After being given oxygen, Blaine, 33, looking weak and wrinkly, addressed the large crowd that had gathered around the tank on the plaza of Lincoln Center for the Performing Arts.

"I am humbled so much by the support of everyone from New York City and from all over the world," Blaine said. "This was a very difficult week, but you all made it fly by with your strong support and your energy."

The challenge had taken a toll on the magician's body, including liver damage, pins and needles in his feet and hands, some loss of sensation and rashes, said Dr. Murat Gunel, who heads Blaine's medical team and is associate professor of neurosurgery at Yale University School of Medicine.

His medical team and trainer said they would talk in detail about his condition at a news conference later Tuesday.

Blaine started training in December, with some help from Navy SEALS. He lost 50 pounds so his body would require less oxygen. The water temperature was regulated to help keep his core temperature near 98.6 degrees Fahrenheit, and he ate and relieved himself by tubes. He remained tethered to an oxygen tube.

As early as on the second day of his challenge, Gunel said, there was evidence that Blaine was suffering liver failure; the medical team consulted with medical experts at NASA before stabilizing his condition. Blaine's underwater environment was similar to the weightlessness experienced by astronauts in outer space, he said.

"I told him he needed to get out of the water, and he refused me," said Gunel. "He said he did not want to let the people down."

The doctor said Blaine had agreed to allow researchers at Yale to examine him after the stunt to see what they can learn about how the body responds to the environment underwater.

All day long, curious onlookers lined up to walk past the sphere.

Linda Brady brought along a boom box and loudly played Jennifer Lopez's "My Love is All I Have." Blaine appeared to respond by bopping to the beat.

"I just love him," said Brady. "He has a creative mind just like me, and he's crazy just like me."

Another spectator, David Linker, said Blaine symbolized "man's strength to go beyond what normal people can do."

Blaine's previous feats included balancing on a 22-inch circular platform atop a 100-foot pole for 35 hours, being buried alive in a see-through coffin for a week and surviving inside a massive block of ice for 61 hours, all of which were performed in New York. In 2003, he fasted for 44 days in a suspended acrylic box over the Thames River in London.