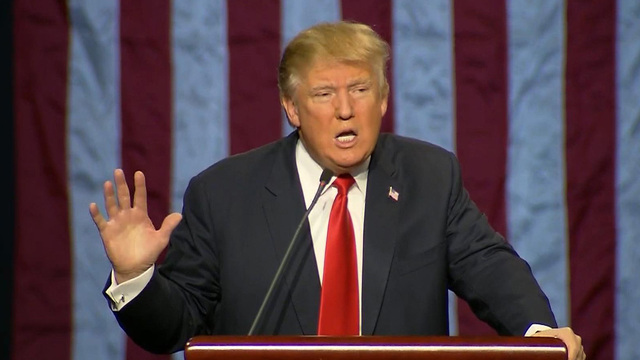 GOP frontrunner Donald Trump hastily canceled a press conference that was to be held on Monday at Trump Tower -- originally billed as an endorsement event with more than a hundred African-American pastors from all over the country. The event was supposed to show Trump's extensive reach in the evangelical community but instead resulted in spotlighting the deep division that exists among the religious faithful over Trump's candidacy.

A number of pastors said that Monday's meeting was never intended to be an endorsement of Trump and were upset that it was being portrayed as such. Pastor Darrell Scott, a pastor from the New Spirit Revival Center in Cleveland, organized the meeting and took responsibility for what he deemed a "miscommunication."

Scott told CBS News that the meeting was initially supposed to be smaller gathering of pastors - "about thirty or forty." All of them were Trump supporters and ready to endorse. However, Scott, with the permission of the Trump campaign, invited more pastors and the invitation list ballooned to more than 100. The miscommunication occurred when the Trump campaign didn't realize that many of the new pastors who had been invited were not prepared to endorse Trump.

"I might've miscommunicated to his campaign and they came away with the assumption that everyone there was going to endorse," Scott said. "I'm being honest with you -- it was a miscommunication that I take responsibility for."

In recent days, several of those pastors announced that they would not be attending the meeting, as a result of the backlash from their congregants.

Hezekiah Walker - a popular gospel singer and pastor of a Brooklyn megachurch Love Fellowship Tabernacle - posted a scathing note to Instagram saying that he would not be attending the meeting. Walker claimed that in recent days that he was called an "Uncle Tom," "money hungry," a "Prostitute on the Poll [sic]" and a "coon dancing with the devil."

The post read in part, "I was prepared to share my thoughts with Mr. Donald Trump about the injustice and racism that still plague our communities as well as enlighten him on his views about our culture that has been misunderstood by him for years....I bow out gracefully and make it very clear that I will not be attending the meeting on Monday with Mr. Donald Trump and neither will I continue to stay connected to the silent hypocrisy of the church. I also want it to be clear that I never had any intentions on endorsing Mr. Donald Trump neither would I have never been persuaded to.[sic]"

Bishop Corletta Vaughn, who starred in the Oxygen show, "Preachers of Detroit" posted a Facebook message earlier in the week saying, " "I will not be in New York with Mr. Trump, nor am I a part of the coalition of Black Pastors being led by Pastor Darrell Scott of Cleveland Ohio."

Scott has been one of Trump's most dedicated supporters since he launched his campaign and enthusiastically endorsed him at a rally in Norcross, Georgia earlier this year.

"When I heard he was running again, I couldn't wait to jump on board," Scott told reporters. "Legislatively - Mr. Trump - I don't know what type of legislator he is or he will be. I don't know what kind of judiciator [sic] he is or would be be. But I do know one thing - he is a hell of a chief executive."

Scott expressed remorse over the episode, which has created a little bit of a headache for the Trump campaign.

"I should've communicated to them better," Scott said. "That's what should've been done."

Scott said he didn't know how many pastors of the hundred or so expected to attend the meeting will endorse Trump, but he did say, "Everybody is coming is very, very interested in what Donald Trump has to say. There are no anti-Trump pastors in the crowd."