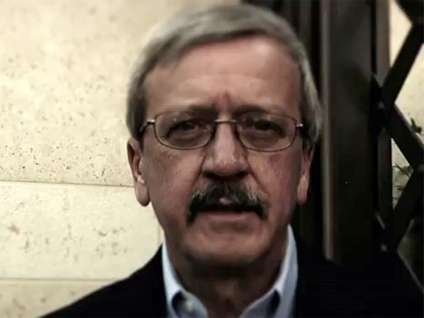 There is an ad up on Herman Cain's official YouTube page that really needs to be seen to be believed.

The web spot features the Republican presidential candidate's chief of staff Mark Block, who is standing outside, offering fairly standard endorsements of the candidate. "I really believe that Herman Cain will put 'united' back in the United States of America, and if I didn't believe that, I wouldn't be here," he says, calling on Americans to get involved in the Cain campaign.

But a number of factors make the spot itself very strange: Block's halting delivery, the close-up nature of the shots, a pair of rapid pans away from Block's face before the cuts. (The quick pans are actually an editing technique used to replicate the circular fast-switching of lenses on old three-lens 16mm cameras.)

And that's all a precursor to the most memorable moment: A close up of Block inhaling a cigarette and then wordlessly exhaling a thin puff of smoke as a woman sings "I am America" in the background. The spot then cuts to a close up of an unsmiling Cain turning toward the camera, the candidate gradually breaking out into a laugh:

The spot was posted on October 19th, according to its YouTube page, but because it was unlisted on Cain's main YouTube page it seems to have gone undiscovered until now. There has been some speculation online that the spot is a hoax, but the Cain campaign late Monday night confirmed to CBS News that it is legitimate.

Campaign spokesman J.D. Gordon said that the video was "just Block being Block."

"I've received quite a bit of positive feedback. Most folks I heard from said it was hysterical," he said.

It remains unclear what the campaign planned to do with the video, whether it was intended to be an ad, or why it wasn't publicly available on Cain's page with his other videos.

Intentionally or not, the ad brings to mind Cain's history opposing smoking bans as a lobbyist with the National Restaurant Association, which the New York Times recently reported out.

A report from CBS News' Kaylee Hartung at the left.

"Under Mr. Cain's leadership, the restaurant association opposed higher taxes on cigarettes and the use of federal money to prosecute cigarette makers for fraud," the Times reported. The story also noted that "Cain argued vociferously that the decision about whether to go smoke-free was the province of individual restaurant owners, not the government."