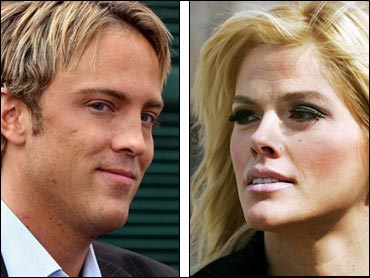 When Larry Birkhead looks at his 9-month-old daughter, Dannielynn, he sees her mother, Anna Nicole Smith.

"She has long legs and chubby little toes exactly like Anna's; it's like a mirror image," Birkhead tells OK! magazine in its latest issue. "It's really incredible. And I think her lips are her mom's lips; especially when she pouts. ... She also gets what she wants exactly like her mom always did as soon as she'd pout."

Smith died in Florida in February. She was 39. The former Playboy Playmate gave birth to Dannielynn in September, a few days before the death of her son, Daniel, 20, in the Bahamas.

Howard K. Stern, her lawyer and companion, initially claimed to be Dannielynn's father, but Smith's ex-boyfriend Birkhead eventually showed he was the father.

Birkhead plans to raise Dannielynn in Los Angeles, where he complains about the attention from the paparazzi.

"I was a photographer and I understand they need a picture, but when they're running you off the road and you're in the car with your daughter and they're putting lenses up to the car so that it's like lightning in the car, it gets to be too much," he tells the magazine.

He's hired a nanny to help out with Dannielynn.

"She's just there to assist me, not to take over any parenting. ... I'm really hands-on, like too hands-on with my hand on the baby, a hand on the cell phone, a hand on the diaper," says Birkhead, who jokes that he has "a supersonic sense of smell when it comes to diapers."

Birkhead is also getting help from Stern.

"He's been really supportive, and we're civil for the sake of Dannielynn," Birkhead says.

Both men were in a Los Angeles courtroom Tuesday as a commissioner admitted Smith's will to probate and ordered that Birkhead would be guardian of the estate while Stern serves as executor of the will.

The step begins a process in which Smith's assets will be identified and the court will determine how they should be distributed. The will left the entirety of Smith's estimated $710,000 in assets to her now-deceased son.