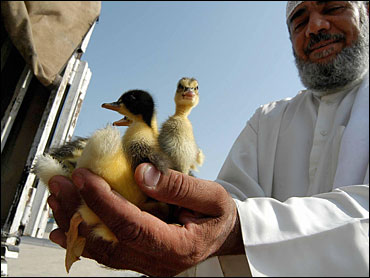 Kuwait has detected two cases of bird flu in birds, a senior official said Thursday, but it was not clear if the virus strain was the deadly version that has devastated poultry in Asia and triggered fears of a human pandemic.

It is the first known case of the disease in the Middle East.

Sheik Fahd Salem Al Ali Al Sabah, the head of the Public Authority for Agriculture and Fisheries, told reporters the first case was discovered at the airport quarantine in a peacock imported from Asia. He did not say which country the peacock came from.

The second case, a flamingo, was found on the beach, the official KUNA agency quoted him as saying.

The official said the country had reported no cases of bird flu among humans.

"Immediate action was taken ... and the situation is under control," Sheik Fahd said, adding the cases were found because of the precautions that Kuwait had taken.

"All of our national production of poultry and eggs are free of the disease," Sheik Fahd said.

In the Gulf region, Dr. Mohammed al-Mihana, of Iran's Public Authority for Agriculture and Fisheries, told The Associated Press that Kuwait laboratory tests found the bird flu strain to be H5, but it was not clear whether it was N1 or N2.

The H5N1 strain has devastated poultry stocks and killed more than 60 people in Asia. It has generated fears of a pandemic if it mutates into a version that can be passed among humans. The H5N2 strain is a mild variant that is believed to cause little illness.

"We are satisfied with our tests, and we find no need for further investigations," al-Mihana said.

Al-Mihana said it was not necessary to conduct a wide cull of birds in Kuwait, but the authority has intensified its watch of poultry farms.

No humans in Kuwait have complained of bird flu symptoms, he added.

"We wouldn't be involved at all until there is a human case," WHO spokesman Dick Thompson told the AP in Geneva.

The entire Middle East region has been worried about possible outbreaks because the region sits on important bird migratory routes. Jordan and Israel are among other countries taking precautions.

Officials in the United Arab Emirates also have said they are highly concerned about bird flu appearing there.

The Kuwaiti government has banned the import of wild birds from all countries, plus poultry from infected states. The ban include "water and land" birds as well as pet and exotic ones.

Despite the ban, birds continue to arrive at the airport, where they are quarantined and tested. The infected peacock was one such bird.

The disease has so far spread to several Asian countries as well as to Croatia, Romania and Turkey.