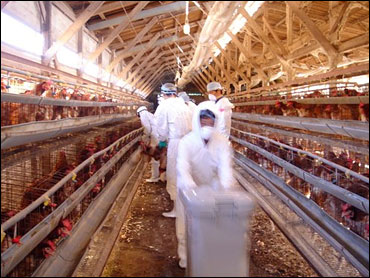 Vietnam, the country hit hardest by bird flu, reported another death on Tuesday.

Vietnam confirmed that a 35-year-old man who died on Oct. 29 had contracted bird flu. The man was admitted to a Hanoi hospital four days after his family bought a prepared chicken from a market near his house.

The case, the first in three months in Vietnam, raised the country's death toll to 42, the highest of any nation.

Vietnam will launch large-scale drills in the second half of November to test the country's pandemic readiness, said health ministry spokesman Pham Tuan Hung. The drills will include treating patients, disinfecting the environment and operating mobile units.

Meanwhile, the Swiss maker of Tamiflu said it had stopped selling the antiviral drug in China and was turning over supplies to the government.

Tamiflu is one of few drugs believed to be effective against bird flu. In the event of a possible human flu pandemic, "the government is in the best position to handle rapid response and distribution," the Chinese arm of Roche Holding AG said in a statement.

The company did not say how much Tamiflu it turned over or whether it would be compensated.

Concerns that private suppliers might be hoarding Tamiflu have led Roche to limit sales in other countries, including the United States, Switzerland, Germany and Canada.

China has reported no human infections of the virulent H5N1 strain of the virus, which has killed at least 63 people elsewhere in Asia. However, health officials say a case is inevitable if China can't stop repeated outbreaks in poultry.

In Geneva, experts at the first major international coordination meeting on bird flu said a human flu pandemic was inevitable and urged countries to draw up plans.

"We must wage a war on this scourge," said Bernard Vallat, head of the Paris-based World Organization for Animal Health.

Experts agree a global flu outbreak capable of killing millions of people is a certainty. What is also certain, they say, is that the virus will come from bird flu.

Six months ago, fewer than 40 countries had a pandemic flu plan, said Dr. Mike Ryan, WHO's director of epidemic and pandemic response. Now, 120 countries, or 60 percent of the WHO member states, have a plan, he said.

The plans include improving early detection of disease, increasing the ability of hospitals to cope with sudden heavy traffic, and the stockpiling of drugs and vaccines.

The fear of bird flu mutating into a form easily transmitted between people is greatest in Asia, where most of the deaths have been linked to direct contact with infected birds.

Also in China, authorities warned Tuesday that fake bird flu vaccines for poultry were threatening public health and said an unapproved product was being sold in northern Liaoning province, the site of a recent outbreak.

"This fake medicine could result in serious consequences," Jia Youling, chief veterinary officer of the Ministry of Agriculture, said in a television interview. "It could cause very serious harm to both people and poultry."

China suffers from rampant and sometimes dangerous product piracy. Bogus medicines that have none of the declared ingredients on the packaging are common.