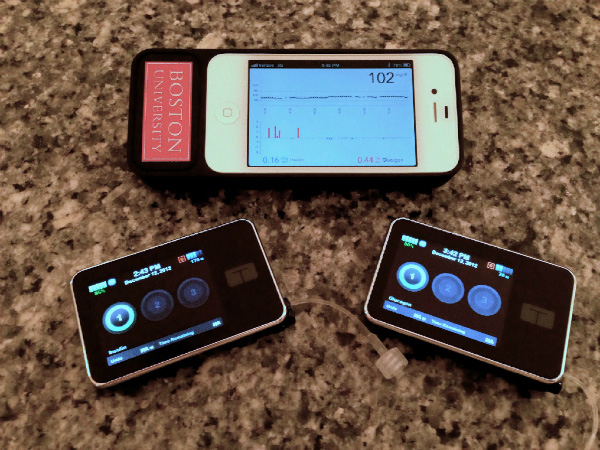 A cure for Type 1 diabetes is still far from sight, but new research suggests an artificial "bionic pancreas" holds promise for making it much more easily manageable.

For some time, researchers have been on a quest to create a device that mimics the functions of the body's natural pancreas and seamlessly stabilizes blood sugar in a person with Type 1 diabetes. Now, results from two early NIH-funded trials, published in the New England Journal of Medicine, may indicate one prototype for a bionic pancreas is on the right track.

It was created by researchers at Boston University and Massachusetts General Hospital and is different from other models currently in development or on the market.

This particular device not only monitors glucose levels in real-time, but also is a bi-hormonal system, which means the device administers both insulin as well as glucagon. The latter hormone typically is used as a "rescue drug," or an antidote for insulin. Almost 10 percent of diabetes-associated deaths are due hypoglycemia, a result of accidental insulin overdose.

"It's a fully autonomous soup-to-nuts solution. You enter the patient's body weight. That is it, and then it just starts controlling blood sugar. Basically, it takes the burden of day-to-day diabetes management off your shoulders."

Damiano said the device would allow Type 1 diabetics to do away with standard -- and often inconvenient -- maintenance such as finger-stick tests and manual insulin injections, as well as the constant worry about keeping up with unpredictable blood sugar changes that result from daily activity and food consumption.

According to the American Diabetes Association, about one million Americans have Type 1 diabetes, an autoimmune disease that often develops in childhood. Recent figures show nearly 10 percent of American adults have diabetes, but the vast majority of them are Type 2. The exact cause of Type 2 diabetes is unknown, but excess weight and a sedentary lifestyle are known to play a role.

The bionic pancreas includes two small pumps that administer both hormones, which are activated by tiny sensors in a thin needle that's placed just under the skin. The prototype is currently monitored with a smartphone through an app built by Damiano and his team.

Damiano said he is working with two medical technology companies, Tandem Diabetes Care and Dexcom, to build the device. They hope to test it on a larger number of patients and get it approved by the U.S. Food and Drug Administration within the next three years.

Damiano and his team found that the device did a better job of keeping blood glucose levels consistent than patients who monitored their levels on their own. Overall the researchers found patients in the study needed 37 percent fewer interventions for hypoglycemia. Additionally, there was a more than twofold reduction of time in hypoglycemia in adults using the bionic pancreas than with the manual pump.

Last September, the FDA signed off on the MiniMed 530G, which joins their internal insulin delivery system to the continuous glucose monitor, both of which previously were sold as separate devices by Medronics. Though that device is a breakthrough, it still only provides insulin to a patient.

"What we're building is a system that uses glucagon like a brake in a car," said Damiano. "The insulin is like the accelerator and the glucagon is like the brake system."

Both the adult and teen study participants demonstrated overall improvements in glucose levels with the device, particularly during sleep when it can be especially challenging for a person with diabetes to keep blood sugar levels stable.

"One of the great fears of people with diabetes is going to bed at night," said Damiano.