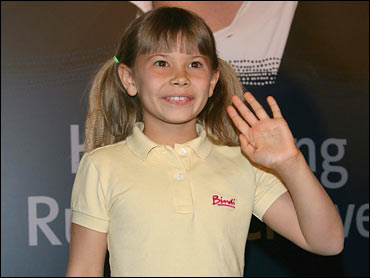 Bindi Irwin wants her new TV show to continue the educational and conservation work of her father, the late "Crocodile Hunter" Steve Irwin.

"I'm proud to be showing kids that conservation and helping wildlife is a stack of fun," 8-year-old Bindi said Friday at the Australian launch of "Bindi: The Jungle Girl."

"It's just the most amazing thing that we could ever do," she said.

Producers say the show will feature Steve Irwin in scenes shot before he was killed by a stingray last fall while filming one of his popular television documentaries.

Irwin's widow, Terri, said her husband would have been very proud of his daughter's debut. The series will air on the Discovery Kids Channel in the United States and the Australian Broadcasting Corp.

"I think he would have said, 'Crikey mate, I couldn't wait for Bindi to take over,' " Terri Irwin said.

Bindi was being groomed as Irwin's successor in his TV and conservation business, which includes a family run animal park at Beerwah in Queensland state.

"Bindi's been filming with us since she first hatched," Terri Irwin said. "It was a natural progression to be doing her own shows, and Steve was involved with the first seven episodes."

"He really enjoyed watching Bindi doing and showcasing the wildlife that he worked with for so many years," she said. "It gave him great pleasure."

Bindi will also host "My Daddy the Croc Hunter," a one-hour special to air June 8 on the Animal Planet.