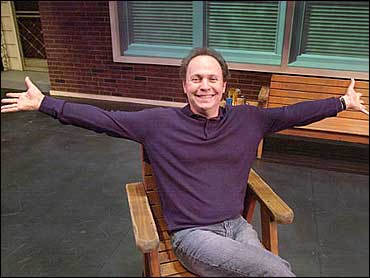 Billy Crystal, after conquering "Saturday Night Live," is taking on the rest of the week. The comic veteran makes his Broadway debut this November with an autobiographical one-man show, "700 Sundays."

"I've never been as excited about anything since I starting working in this play," Crystal told The Associated Press. "It's been such a great energy at this point in my life, to be able to bring the show to New York."

The Crystal-penned piece marks his first extended return to live performing in 16 years, the comedian said. Crystal portrays numerous characters drawn from his childhood, his teen years and adulthood.

"As a comedian, I wanted to take the 'good evening, ladies and gentlemen' out of the show," the eight-time Academy Award host said in a telephone interview. "It's not a concert, but there are elements of that. It's deeply personal and liberating at the same time."

The title relates to Crystal's father, Jack, a jazz concert producer who died when the comic was just 15.

"He always worked two or three jobs, so Sunday was the only day to be together with Dad," Crystal said. "And I calculated that I only had 700 Sundays with him."

"I remember just feeling the excitement," Crystal said. "I never lost that."

Those moments, along with his lifelong obsession with the New York Yankees, are fodder for the show. Crystal's parts are supplemented by vintage home movies, old family photos and even a clip of Mickey Mantle at the plate.

"It feels like a visit with my family," said Crystal, 57, who first performed the work in progress earlier this year at the La Jolla Playhouse in California.

It was a great day that only improved: Crystal snagged a foul ball.

"The perfect Father's Day," he said.