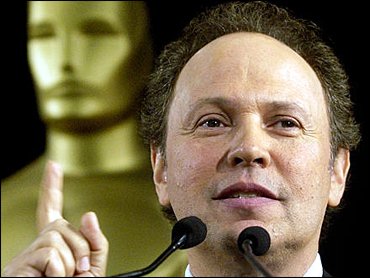 Billy Crystal is planning a reunion with Oscar.

The star of "City Slickers" and "Throw Momma from the Train" said Wednesday he has signed on to host the Academy Awards for the eighth time.

"Hello boys," Crystal said at a news conference at the Academy of Motion Picture Arts and Sciences after leaping astride two enormous statues of the Oscar figurine.

"I'm really excited about coming back," Crystal said about resuming his hosting job for the first time in three years. "I've had a nice, long sleep."

He declined to offer any early speculation about who may win this year's top awards.

"I don't go to the movies," he deadpanned. "Have you seen what they've become?"

Crystal, who often launches the Oscar ceremony with a song-and-dance number poking fun at the top nominees, has won Emmys for his Oscar hosting performances in 1991, 1992 and 1998.

Like the late Bob Hope, who hosted the show 18 times, Crystal is a favorite of TV critics who praise his easygoing style as master of ceremonies and the touch of class he brings along with the laughs.

Since he last hosted in 2000, when "American Beauty" was the best-picture winner, two other comedians have handled the responsibility: Whoopi Goldberg once and Steve Martin twice.

The upcoming Oscar show on Feb. 29, 2004, will mark another collaboration between Crystal and movie producer Joe Roth, who is overseeing the telecast. They previously worked together on the 2001 comedy "America's Sweethearts."

Roth told reporters that when he agreed to produce the 76th Academy Awards, Crystal was "the one and only call to make."

Crystal said he has one tradition whenever he appears at the Oscars: He carries a toothbrush in his jacket pocket.

As a child growing up on Long Island, the 55-year-old said he'd rehearse Oscar speeches in the bathroom mirror while holding his toothbrush like an award.

"I always carry it" while hosting, Crystal said. "It's not the one I grew up with as a kid — I'm doing better than that — but it's a great remembrance to not forget where your love of performing started."