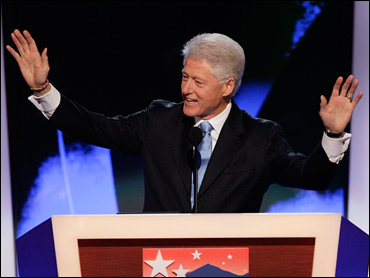 Bill Clinton said Monday he understands why Sarah Palin is popular in the heartland: because people relate to her.

"I come from Arkansas, I get why she's hot out there," Mr. Clinton said. "Why she's doing well."

Speaking to reporters before his Clinton Global Initiative meeting, the former president described Palin's appeal by adding, "People look at her, and they say, 'All those kids. Something that happens in everybody's family. I'm glad she loves her daughter and she's not ashamed of her. Glad that girl's going around with her boyfriend. Glad they're going to get married."'

Mr. Clinton said voters would think, "I like that little Down syndrome kid. One of them lives down the street. They're wonderful children. They're wonderful people. And I like the idea that this guy does those long-distance races. Stayed in the race for 500 miles with a broken arm. My kind of guy."

Palin, the governor of Alaska, became an overnight star when Republican presidential candidate John McCain tapped her for his running mate. Her family, including her Down syndrome baby, Trig, her pregnant 17-year-old daughter, Bristol, and her husband, Todd, four-time winner of the 2,000-mile Iron Dog snowmobile race, have garnered intense media interest.

"I get this," Mr. Clinton said. "My view is ... why say, ever, anything bad about a person? Why don't we like them and celebrate them and be happy for her elevation to the ticket? And just say that she was a good choice for him and we disagree with them?"

The global initiative, a project of Clinton's foundation, will hold its four-day annual meeting in Manhattan starting Tuesday.

After that, Clinton said he will be busy campaigning for the Democratic ticket of Sens. Barack Obama and Joe Biden.