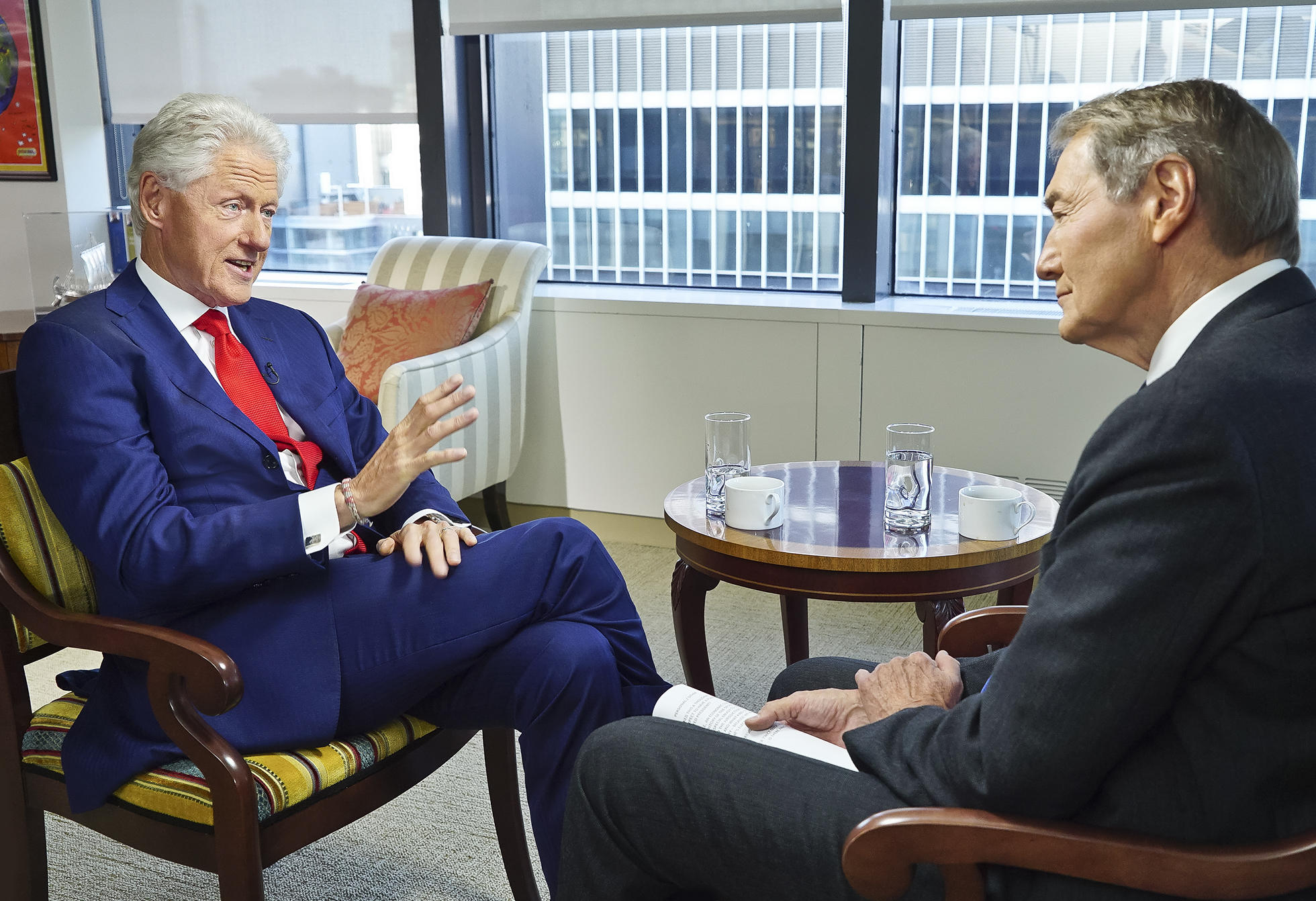 To see more of this interview, watch “Charlie Rose” on PBS, and “CBS This Morning” Tuesday.

Former President Bill Clinton, who spoke with CBS News’ Charlie Rose about the Clinton Foundation ahead of its final Clinton Global Initiative conference, said Monday that Hillary Clinton is “doing fine” after she abruptly left a 9/11 memorial service Sunday due to her recently diagnosed pneumonia.

“She’s doing fine, she was even better last night before she went to sleep. She had a good night’s sleep she’s doing fine,” he said. “We’ve gotten all these, as you might imagine, emails and text messages and calls. A friend of ours called and left a message today, that her husband had actually just been hospitalized for pneumonia apparently there’s a lot of it going around and a bunch of her staff has gotten sick. But she’s just doing fine. She just got dehydrated yesterday.”

Hillary Clinton left the ceremony in New York early after what her campaign said was feeling “overheated,” going to her daughter Chelsea’s apartment in Manhattan to recover before heading home to Chappaqua, New York. On Sunday evening, Clinton’s campaign released a statement from her doctor saying she had been diagnosed with pneumonia on Friday.

Asked if there was any chance her faintness on Sunday could be a sign of some more “serious” illness, Clinton said he did not believe that was the case.

“Well if it is, it’s a mystery to me and all of her doctors,” he said, “because frequently—well not frequently, rarely—but on more than one occasion, over the last many, many years, the same sort of thing happened to her when she got severely dehydrated.”

He noted that she had “two and a half hard days” on the campaign trail prior to the 9/11 ceremony, adding that he’s “glad” she made the decision to take a day off from the campaign trail Monday. The campaign has since announced that Bill Clinton will fill in for her at events Tuesday and Wednesday.

“I was glad today she made a decision, which I think was correct, to cancel her campaign day to take one more day to rest,” he said. “But she looked like a million bucks this morning I can tell she’s feeling a lot better.”

Clinton also said he’s “unaware” of any instance in which a Clinton Foundation donor ever received special treatment from Hillary Clinton’s State Department. The foundation, he said, has been “as transparent as we can be.”

“I have said to the best of my knowledge nobody ever got anything from the State Department because they supported the Clinton Foundation,” he told Rose. “If they did and it was inappropriate, I would say that was wrong too. I have proved that I’m not averse to apologizing for things that I think were wrong. So I am unaware of that.”

The Clinton Foundation, created after Bill Clinton left the White House in 2001, has been at the center of questions about whether foreign donors to the foundation represented a conflict of interest at Hillary Clinton’s State Department. An Associated Press investigation released last month found some overlap between Clinton Foundation donors and the people Clinton met with during her four-year tenure at State. Since then, the foundation has announced that if Hillary Clinton is elected president, Bill Clinton will step down from the board and the foundation will stop accepting foreign and corporate donations.

Clinton also differentiated between drawing on long-standing relationships around Washington and the kind of “pay-to-play” allegations some have leveled at the foundation, saying he doesn’t know of any instance where someone donated to the foundation specifically to get face time with his wife.

“Now, if you think nobody should ever call somebody they know and say, ‘Well, so-and-so would like a meeting’—that’s just the way the national government works, so I can’t say anything about that,” he said. “But I can say to the best of my knowledge … that the people they accused or implied gave money to the foundation just so they could have some in with Hillary did not do that. That’s simply not true.”