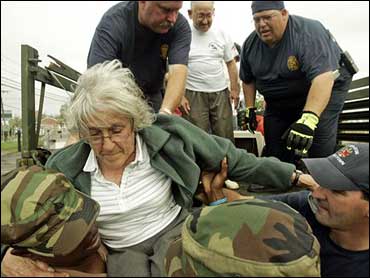 Navy and Air Force teams battled high winds and heavy rain to rescue people from Hurricane Rita's aftermath, and now lawmakers must decide how to give the Pentagon a bigger role in natural disasters without trampling on state's rights.

As local emergency workers in small boats plucked people from their flooded homes in Intercoastal City, La., Navy pilots maneuvered their Seahawks between power lines on the edge of a drawbridge in 35-knot crosswinds, to pick up the evacuees and take them to higher ground.

"I've been flying for 18 years and it was, by far, some of the worst conditions I've flown in," said Navy Cmdr. Gerard Hall Sunday, speaking from the USS Iwo Jima. "The biggest challenge was keeping the aircraft pointing in the right direction."

Not far away in Vermillion Parish, La., Air Force teams using night-vision goggles and infrared radar discovered two residents stranded on a rooftop, and pulled them to safety.

But as difficult as the conditions were for the military rescuers, the challenge for policy makers is even more complex.

President Bush said Sunday that he is continuing to explore ways to expand the Pentagon's role in major disasters, particularly in light of the problems and response delays in the aftermath of Hurricane Katrina.

Currently, a state's governor is chiefly responsible for disaster preparedness and response, including control over the state's National Guard troops.

Maj. Gen. M. Scott Mayes, leader of the military's air component in the hurricane relief effort, told Bush in a videoconference that a national plan is needed to have a faster response and save more lives.

CBS News correspondent Mark Knoller reports that Mr. Bush heard some blunt talk about the federal response to Katrina, that one of his generals refereed to as a "train wreck."

"We had someone who needed to rescued … five helicopters went to the same place to get one person out," said Maj. Gen. John White of the Joint Military Task Force. "That's the sort of simplistic thing we'd like to avoid. We're not maximizing the use of our forces to the best efficiency.

Mr. Bush was receptive to White's suggestion of a better coordinated national plan for search and rescue (video).

White House press secretary Scott McClellan told reporters on Air Force One Sunday that Bush talked about whether "there is a trigger that comes into play in the event of a catastrophic event where the Department of Defense would need to come in and help really to help stabilize the situation."

That trigger, he said, would only be considered in a catastrophic event.

But members of Congress are already weighing how far they should go without treading too heavily on states rights.

"I'd say that we have a general agreement that the military has a very strong role to play, but so do our governors and our local elected officials," said Sen. Mary Landrieu, D-La., in a CNN interview. "We do have a democracy and a citizenship that has elected mayors, county commissioners and governors, particularly. I'm not sure the governors association or all the mayors in America would be willing to sort of step aside."

"We need the military, because of its extraordinary capabilities, to be ready to play a much more active role," said Sen. Joe Lieberman, D-Conn. on Sunday. The Senate Homeland Security and Governmental Affairs Committee has already begun investigating the military response to Katrina, and how it could have been done better, he said.

In the days after Katrina, there was some discussion about whether Lt. Gen. Russel Honore — head of the military task force for the hurricane response — should play a dual role and also command the National Guard troops.

The active duty troops in the field Sunday said their rescue operations were running smoothly, in cooperation with Guard and Reserve units and local emergency responders.

Air Force Col. Mark Noyes, who is directing the Air Force rescue mission flying out of Randolph Air Force Base, said his Pave Hawk helicopter teams rescued 12 patients — including three critically injured people — from a convalescent home in Fred, Texas, and transported them to a Houston hospital.

He and Hall said it appears more people fled the area, than did before Katrina. But Navy teams were still searching more than 4,000 nautical miles along the Texas and Louisiana coastline for survivors.