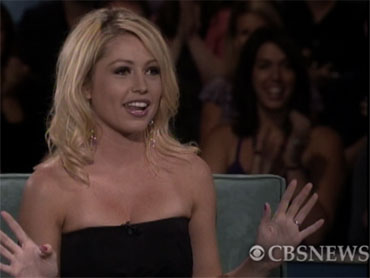 Britney Haynes outlasted all the other women in the "Big Brother" game. But she finally got the boot last night.

What was her strategy? After all she outlasted all the other women.

Chen praised the Huntington, Ark. native and hotel sales manager, saying she should be proud and feel good about it.

"My strategy going in was very much not to overplay the game. And to let everything sort of happen organically," she said.

According to Chen, viewers definitely all saw a bond between Haynes and Lane with their flirtatious relationship.

If Haynes wasn't engaged, would we have seen another couple in the house other than Brendan and Rachel?

"No, Lane is like my big brother. No, Julie! Can you imagine?" she said.

"You don't think Lane has a crush on you?" Chen asked.

Judging from the audience's applause, many would beg to differ.

And on the flip side, can viewers be sure that Haynes doesn't have feelings for Lane?

"He's like my older brother. Like, he treats me like a big brother, he pesters me, he annoys me, he gets on my nerves. He makes me mad. He's so irritating, he won't listen to anything I say," she said.

While living in the "Big Brother" house, Haynes said that she had been locked away, and didn't even know if she was engaged anymore.

So, why would she say that?

"Because who knows what's going on in the world?" she said.

Haynes even made up an imaginary girlfriend for her fiancé.

"What if, I have, my fiancé, I have a new girlfriend for him. She has a name. I've made up an entire personality for her. Because when you sit in the house and you have nothing else to think about, these ideas just fester," Haynes explained. "So her name's Nicole and she's a brunette. And she's like the complete opposite of me. She's real cool, she's not prissy. She's likes to get dirty. I have like a whole personality for this girl."

"Alright so if Nicole comes to life, and is real, then are you going to start a romantic relationship with Lane?" Chen asked.

Be sure to watch the last three men in the house duke it out for the half-million dollar prize on "Big Brother" tonight at 8 PM, 7 PM Central.