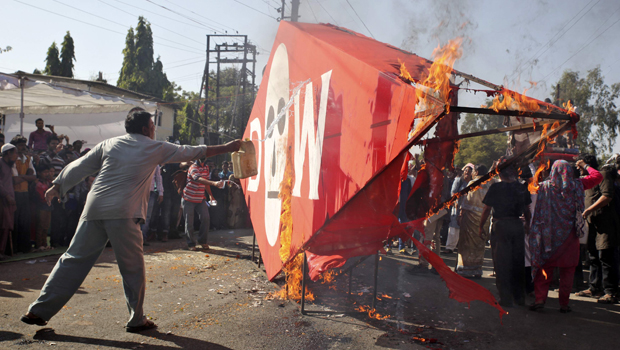 Hundreds of survivors of the gas leak that claimed thousands of lives took to the streets Wednesday to mark the 30th anniversary of the disaster, chanting slogans and carrying placards demanding harsher punishments for those responsible and more compensation for the victims.

On the morning of Dec. 3, 1984, a pesticide plant run by Union Carbide leaked about 40 tons of deadly methyl isocyanate gas into the air in Bhopal, quickly killing about 4,000 people. Lingering effects of the poison pushed the death toll to about 15,000 over the next few years, according to Indian government estimates.

In all, at least 500,000 people were affected, the government says. Thirty years later, activists say thousands of children are still being born with brain damage, missing palates and twisted limbs because of their parents' exposure to the gas or water contaminated by it.

"I still feel the pain even today. I still see those images," said Mohammed Ismail, a 57-year-old rickshaw driver whose daughter lost vision in both of her eyes after the gas leak. "On every gas anniversary, I feel it would have been better for me to die that night."

While the disaster's anniversary is a major annual event for survivors, it's largely ignored by most Indians and the government. On Wednesday, there was no comment from any senior Indian government official about the 30th anniversary.

American chemical company Union Carbide Corp. has said that the accident - which took place when water entered the sealed tank containing the highly reactive methyl isocyanate - was an act of sabotage by a disgruntled employee, never identified, and not lax safety standards or faulty plant design, as claimed by some activists.

Union Carbide was bought by Dow Chemical Co. in 2001. Dow says the legal case was resolved in 1989, when Union Carbide settled with the Indian government for $470 million, and that all responsibility for the factory now rests with the government of the state of Madhya Pradesh, of which Bhopal is the capital.

In an emailed statement Wednesday, Union Carbide said that U.S. courts had ruled that the plant was owned, operated and managed by Union Carbide India Limited. After its closure and the sale of UCIL stock by Union Carbide, the site became the responsibility of UCIL's successor company, Eveready Industries India Limited. In 1998, the Madhya Pradesh state government revoked Eveready's lease on the site and assumed all control for it, including remediation, the statement said.

It said that Union Carbide and the rest of rest of the chemical industry has worked to help prevent such an event by improving safety standards, community awareness and emergency preparedness, including protecting workers and communities by working with governmental bodies to assure that industry practices are implemented through regulations.

In Bhopal, which remains anguished by the disaster, most consider Union Carbide's settlement with the government an insult.

Even today, the suffering in Bhopal is palpable. Both survivors and activists say that thousands of children born to parents directly exposed to the gas leak or poisoned by contaminated water have been plagued by birth defects. Cancer rates in the city are inordinately high. Skin, vision and breathing disorders are endemic.

The survivors have blamed both their own government and Dow for their suffering.

India's government is blamed for negotiating what the survivors consider low compensation and then ignoring them. Dow, meanwhile, is heavily criticized because it now owns Union Carbide - the American company that had a majority stake in the pesticide plant that leaked the lethal gas.

"Everything was destroyed," she said Tuesday during an evening vigil. "And my sons and my daughter-in-law died, my leg was amputated. I have to drag myself. These killers did not heed anything. Why are they not brought to court? Why are they not hanged?"

In the poor neighborhoods behind the Union Carbide plant, where the worst of the tragedy unfolded, survivors and their relatives and supporters burned effigies of Warren Anderson, who headed Union Carbide Corp. at the time of the leak, and a banner emblazoned with the logo of Dow Chemical Co., which bought Union Carbide.

Angry protesters spit on the effigies and the banner, and some young boys urinated on them before they were set on fire.

Anderson died in September in a nursing home in Vero Beach, Florida. Just after the disaster, Anderson traveled to India, where he was arrested. He left the country while free on bail and never returned.

In 2011, the Indian government made a renewed push to extradite Anderson, then 90, from the United States, without success. Prosecutors wanted to try him on culpable-homicide charges.

Anderson remained a focus of much of the anger of those who survived the gas leak, a symbol of what they perceive as the lack of accountability of big multinational corporations.

Dow Chemical says it has no liability because it bought Union Carbide more than a decade after the cases had been settled.