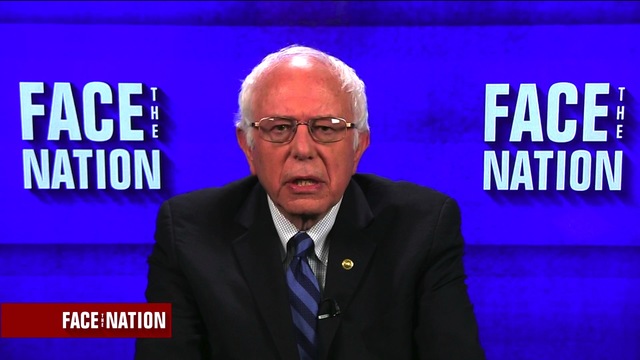 Vermont Sen. Bernie Sanders spent the week of the Democratic convention working to bring his supporters on board for Democratic nominee Hillary Clinton, but on Sunday he acknowledged that not all of them will end up backing Clinton in November.

"We have over 13 million people who supported my candidacy. And I have no doubt that there are some of those people who will not vote for Hillary Clinton," Sanders said on CBS' "Face the Nation." "But I would say that the vast majority of them -- and I think as the campaign progresses and people take a hard look at the issues -- I think more and more of those people will come on board Sec. Clinton's campaign."

Many of Sanders' supporters showed up at the Democratic convention in Philadelphia last week determined to make trouble for the nominee-to-be Clinton. Some of them walked out or booed during speeches, and many pro-Sanders protesters held court outside the convention site. But Sanders spoke on Clinton's behalf Monday night, and was the one to formally nominate her for president, all efforts on his part to unify the party behind her candidacy.

"I would ask ... of my supporters to get away from the personality conflicts that media tries to bring forward and focus on the real issues impacting the American people," Sanders continued. "And when you do that, I think the choice is pretty clear and that is that Hillary Clinton is far and away the superior candidate."

Asked why he didn't look particularly thrilled during Clinton's shout-out to him and his supporters Thursday night -- leading some to question whether he was happy with the way things had turned out -- Sanders joked that he's never been a particularly cheerful-looking guy.

"I always have that look on my face," he said. "It's nothing new, I'm not always a smiley kind of guy."

He added that the convention was "a very good convention" and Clinton's speech included some "very, very important points."

"The most important point to me is that I happen to agree with Sec. Clinton that Donald Trump is not--it's not that it's not a typical campaign, the whole nature of his campaign is not on issues as much as it is on bigotry, on trying to divide us up," he said. "In these stressful times we've got to bring our people together not divide us up, which is what Trump is trying to do."

Sanders said he will be campaigning "vigorously" on Clinton's behalf, pitching her campaign and combating Trump's message across the country this year. Asked whether he planned to hold Clinton accountable for the progressive policy promises she's made, like tuition-free college for families at a certain income level and expanded health care rights, Sanders said he views that as his role in the U.S. Senate next year and beyond.

"In that capacity I surely will do everything that I can to make sure that a Clinton administration and a Democratic Senate and the House to the degree that I can, stands up for working families, is prepared to take on the billionaire class, is prepared to try to create a vibrant democracy not allowing billionaires to buy elections," he said. "I will do all of those things."