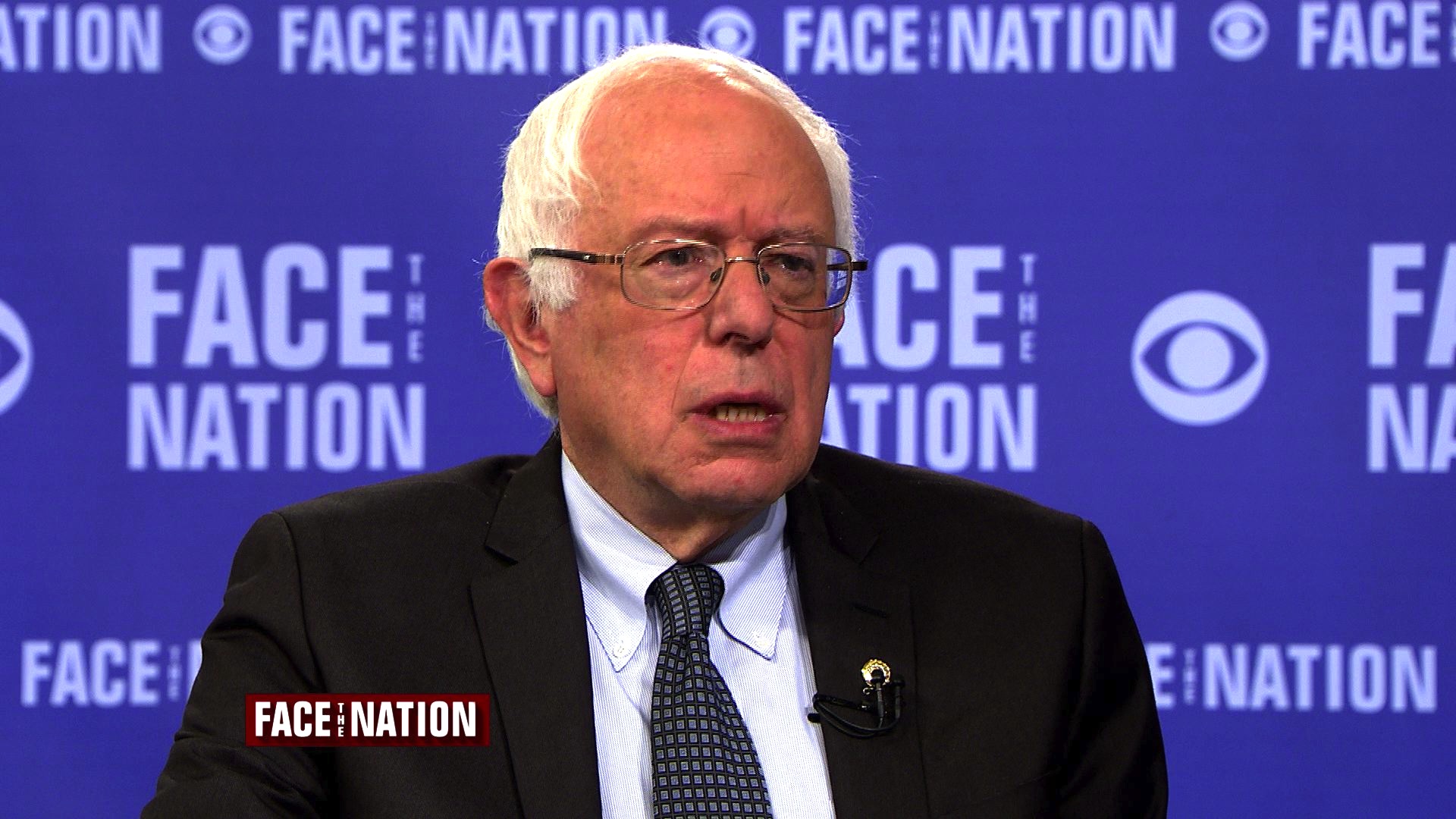 Bernie Sanders, Vermont's independent senator and a self-proclaimed Democratic socialist, says he can beat Hillary Clinton for the Democratic nomination in 2016.

On CBS' "Face the Nation" on Sunday, Sanders said he thinks he can oust the former secretary of state because, "there is, in my view, massive dissatisfaction in this country today with corporate establishment and the greed of corporate America and the incredibly unequal distribution of wealth and income, which currently exists."

And Sanders said his record on that issue over the past 25 years shows that he has led the way in standing up for working families and taking on "the billionaire class," Wall Street, private insurance companies and drug companies.

Sanders is hesitant to criticize Clinton, saying that he respects and admires her. But pressed on the question of why he would make a better Democratic nominee, he points to three things: his opposition to the Trans Pacific Partnership, a massive Asia-Pacific trade agreement being negotiated, his vote against the war in Iraq and leadership fighting against it, and the work he has done opposing the Keystone XL pipeline.

"I'm not quite sure Hillary Clinton has come out with a position on that," he said.

In a separate interview on "Face the Nation," Democratic strategist Stephanie Cutter said it is still "pretty likely" Clinton will be the Democratic nominee, but that Sanders "has a role to play" in the debate.

"I think that there's nobody in the race right now who presents a real challenge to her in terms of taking the nomination away. But it's important to remember and we've been through this process many times, that we are many, many months away from the nomination, never mind the election," she said.

Former House Speaker and 2012 presidential candidate Newt Gingrich, who appeared alongside Cutter on the show, seemed to concur, when he said, if "you were betting today, you would say she is overwhelming favorite to be the nominee."

"If she doesn't get the nomination, it will be because 'not Hillary' beats 'Hillary,'" he said. "It won't be because some candidate beats Hillary."

In his "Face the Nation" interview, Sanders reserved the bulk of his criticism for the Supreme Court and its role in opening up a flood of money into politics through the 2010 Citizens United decision.

"As a result of this disastrous Citizens United Supreme Court decision, clearly the billionaires, Koch brothers and others, are owning the political process. They will determine who the candidates are," Sanders said.

He pledged that he would use the issue as a litmus test for anyone he would nominate to the Supreme Court as president.

"That nominee will say that we are going to overturn this disastrous opinion on Citizens United because that decision is undermining American democracy. I do not believe that billionaire should be able to buy politicians," Sanders said.

Clinton will help raise money for a super PAC supporting her candidacy during 2016 even though she has pledged to "get unaccountable money out of [the political system] once and for all," even if it takes a constitutional amendment to overturn the court decision.

"With some Republican candidates reportedly setting up and outsourcing their entire campaign to super PACs and the Koch Brothers pledging $1 billion alone for the 2016 campaign, Democrats have to have the resources to fight back," a Clinton aide told CBS News last week. "There is too much at stake for our future for Democrats to unilaterally disarm."

Even that decision didn't draw fire from Sanders.

"I understand where she's coming from," he said, though he added that he will not have a super PAC supporting his campaign. Sanders noted that since he announced his candidacy at the end of April he has received nearly 90,000 donations, and the average is $43.

"I don't think we're going to outspend Hillary Clinton or Jeb Bush or anybody else, but I think we are going to raise the kinds of money we need to run a strong and winning campaign," he said.

Gingrich, whose campaign was kept alive in part because of donations from billionaire casino magnate Sheldon Adelson, said that there is "a declining value when you get above a certain number" in campaign cash.

"The key for a candidate, which I failed, was to get above a critical mass," Gingrich said. "If [2012 GOP nominee Mitt] Romney couldn't have outspent me three to one, I might have become the nominee. But there's a point at some time, somewhere between five and 20 to one, where you drown. Nobody who is the nominee in the general election is going to get outspent by a huge number because the country is too polarized on what kind of future it wants and both sides can generate huge amounts of money."

Cutter said that the amount of money in politics has made voters cynical, and people begin to tune out the huge amounts of money and negativity in modern political campaigns.

"We do need to figure out how we take action to get this money out of the system," she said.