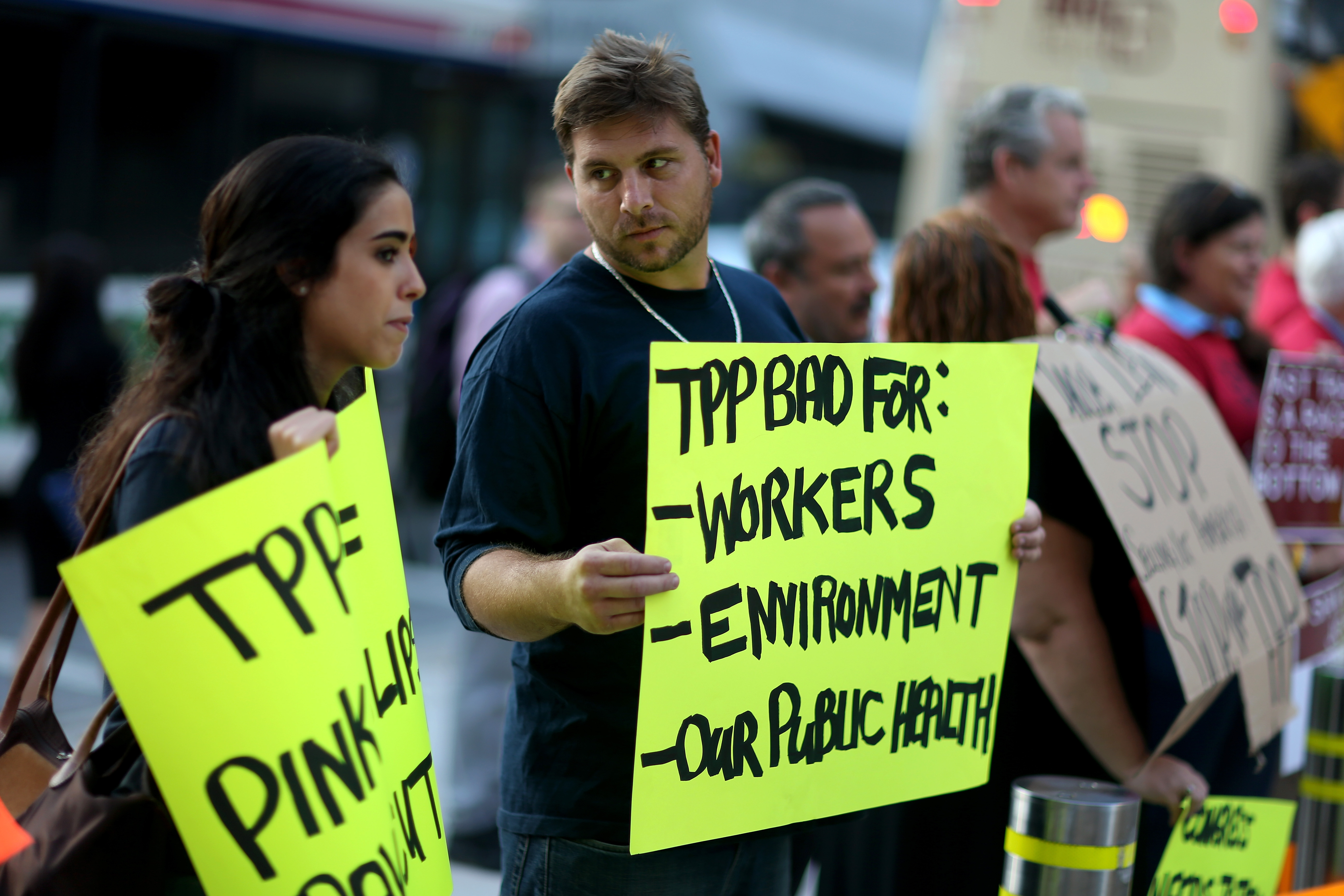 A looming trade deal between the U.S. and countries in the Asia-Pacific region is putting divisions in the Democratic Party on full display and could even become a wedge issue in the party's 2016 primary.

The Trans-Pacific Partnership (TPP) is a trade agreement between the U.S. and Canada, Mexico, Australia, Brunei, Chile, Japan, Malaysia, New Zealand, Peru, Singapore, and Vietnam. The Obama administration and many Republicans argue that it will help open up new markets for U.S. exports, which would mean economic growth and more jobs at home. But some Democrats are convinced the agreement would send more American jobs overseas, hurt wages at home, and harm the environment.

In the coming weeks Congress will decide whether to give President Obama the ability to fast-track the trade deal. With Trade Promotion Authority, Congress would give the president objectives for the negotiations and agree to a yes-or-no vote on the entire deal. Lawmakers would forego the ability to change individual provisions.

The Senate Finance Committee began work on a bill on Wednesday, and Majority Leader Mitch McConnell said he'll push for a final vote by Memorial Day. The House is set to consider its version and a Democratic alternative on Thursday.

Who supports the trade agreement?

Mr. Obama champions the trade legislation as the cornerstone of his Asia-Pacific policy. Its success would become a major part of his legacy, just as the North American Free Trade Agreement (NAFTA) is a part of Bill Clinton's.

In 2008, then-Sen. Obama ran as a skeptic of free trade agreements and even vowed during the primary to renegotiate NAFTA. But now he says the U.S. can expand its export market in a way that doesn't hurt American workers.

"I think that we had a stretch of a couple of decades where, in part because of globalization, you had manufacturing moving to other places in search of low wages, no environmental standards, no labor standards. So trade deals haven't always worked for us," the president said in an interview on MSNBC Tuesday. "But what I've also always believed is that it's important for us to be able to export our goods, to make sure our businesses are competitive."

This deal, he says, will ensure access to foreign markets that is fair and reciprocal to the access other countries have to the U.S. He called the labor and environmental standards "unprecedented" and said it "fixes a lot of the problems" in NAFTA.

To opponents of the deal, like Sen. Elizabeth Warren, D-Massachusetts, the president says, "I love Elizabeth. We're allies on a whole host of issues. But she's wrong on this."

Elizabeth Warren: The Massachusetts Democrat, an influential progressive in the party, is concerned that the pact will weaken financial protections imposed in the U.S. and will also undermine U.S. sovereignty.

In late February, she penned a Washington Post op-ed about a provision that would let foreign investors challenge U.S. laws in favor of international arbitrators. The provision, called Investor-State Dispute Settlement, would, she says, potentially leave U.S. taxpayers on the hook for huge payouts to multinational corporations.

"Replacing the U.S. legal system with a complex and unnecessary alternative -- on the assumption that nothing could possibly go wrong -- seems like a really bad idea," Warren wrote.

Responding to the president's criticism Wednesday, Warren wrote a blog post urging her supporters to sign a petition saying there should be no vote on fast-tracking the trade deal until "the regular people whose jobs are on the line" are allowed to see what's in it.

"We need to stop entering into bad trade deals. I'm for trade, and I'm for good trade deals. But I'm against bad trade deals like the Trans-Pacific Partnership," O'Malley said in a new web video posted on his leadership PACs website.

In a nod to Clinton's recent memoir, "Hard Choices" - in which Clinton writes approvingly of the trade deal - O'Malley blasted the video to his supporters in an email with the subject line, "Hard choice?"

He answered his own question, saying, "Nope. To me, opposing bad trade deals like TPP is just common sense."

Bernie Sanders: The independent senator from Vermont who's considering a presidential run used procedural rules to slow down consideration of the fast-track legislation in the Senate Wednesday. "I think it's time we slowed down fast track....[W]e need more transparency; we need to know what is in this legislation," he said.

Democratic leaders in Congress: Senate Minority Leader Harry Reid, D-Nevada, has said he is, "not only no, but hell no" on fast-track legislation - but at the same time, he won't single-handedly try to defeat the bill. House Minority Leader Nancy Pelosi, D-California, is endorsing the alternate Democratic bill on fast-track authority that seeks greater protections for workers and changes to currency policies from U.S. trading partners.

With the party at war over trade, Clinton, the only declared Democratic candidate, is treading lightly.

She supported NAFTA and advocated for TPP as secretary of state. Even after leaving the Obama administration, Clinton complimented the trade deal in her 2014 memoir, "Hard Choices." She echoed the administration in saying the deal would have the effect of "lowering trade barriers while raising standards on labor, the environment, and intellectual property."

But her latest statement on the issue was vague.

"Any trade deal has to produce jobs and raise wages and increase prosperity and protect our security and we have to do our part in making sure we have the capabilities and the skills to be competitive," Clinton said during a campaign event in New Hampshire earlier this week. "It's got to be really a partnership between our business, our government, our workforce [and] the intellectual property that comes out of our universities, and we have to get back to a much more focused effort in my opinion to try to produce those capacities here at home so that we can be competitive in a global economy."

It's not the first time Clinton has sounded tepid on free trade during a campaign. Despite her support for NAFTA as first lady, she called it a "flawed" deal as a Senate candidate. During a debate in 2007, she went so far as to call it a "mistake" because it didn't deliver on what supporters hoped it would, and said she would call for a "trade timeout" while president.

Former Florida Gov. Jeb Bush, who is not yet running for president, wrote a post on Medium in support of TPP and questioned Clinton's wavering stance.

"I haven't changed in my view even though Hillary Clinton has. It is time to move forward as even recent Democratic presidents have recognized -- and Sec. Clinton shouldn't stand in the way for political gain," he said.

Though a slew of Democratic groups and politicians have lined up to oppose the trade deal, they may no longer represent the views of the party as a whole.

A March 2015 Gallup poll found that Democratic views on trade had rebounded by 25 percentage points since bottoming out during the recession in 2008. Then, just 36 percent of self-identified Democrats said they viewed foreign trade mainly as an opportunity for economic growth rather than a threat to the economy. In 2015, that number rose to 61 percent.

Overall, 58 percent of Americans say they see trade as an economic growth opportunity and just 33 percent see it as a threat. Republicans are currently more skeptical, with just 51 percent saying they view trade as an opportunity (that's up from 41 percent in 2012, but down from a high of 57 percent in 2002).

"There's always been a question about the relationship between the most vocal groups within the party and the sentiments of the party as a whole," Bill Galston, a domestic policy expert at the Brookings Institution who advised President Clinton, told CBS News. "As confidence in the economic recovery has gained strength, the balance of opportunity and threat perception has shifted in the direction of opportunity."

Those who are still on the "threat" side of the balance, white working-class men who don't have a college degree, are increasingly likely to identify as Republican (the president won just 36 percent of their votes in 2012). But just because the Democratic outlook on trade is rising, Galston said it's not necessarily safe for a candidate to wholeheartedly embrace TPP.

"It's complicated," he said. "People who are most likely to participate [in the primary] are not just a microcosm of the Democratic Party electorate. So a majority of the party as a whole doesn't necessarily coincide with a majority of primary voters and caucus attendees."