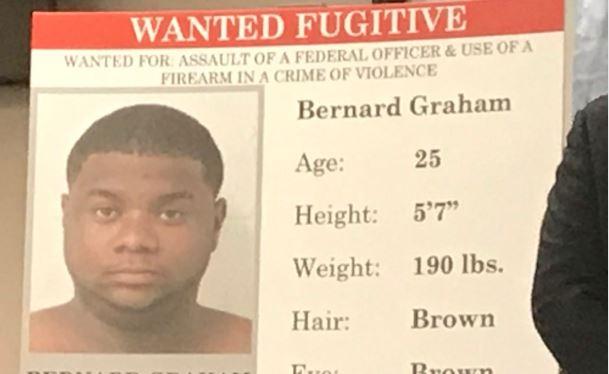 CHICAGO — Federal authorities have charged two men in connection with a shootout during an undercover gun buy operation in Gary, Indiana, which left an ATF agent wounded and a suspect dead on Thursday. U.S. Attorney Thomas Kirsch said 25-year-old Bernard Graham and 19-year-old Blake King have been charged with felony counts of assaulting a federal officer and using a firearm in a violent crime.

Graham is a fugitive, and the ATF is offering a $25,000 reward for information leading to his arrest, reports CBS Chicago.

A third suspect in the case, a 29-year-old man from Dolton, has not yet been charged. A fourth suspect was killed in the shootout.

According to Kirsch, federal agents were conducting an undercover operation on Thursday. Kirsch said the Dolton man was trying to illegally sell handguns to an ATF informant in the Little Village neighborhood, and met with the informant Thursday morning in south suburban Lansing.

The two then went with undercover ATF agents posing as gun buyers to a home at in Gary, where the Dolton man introduced the informant to his firearm supplier, 28-year-old Raymond Truitt II, Kirsch said.

While in the home, Graham lifted his shirt to show the informant a gun in the waistband of his pants, and then Truitt asked for the money.

King then pulled the informant's shirt over his head, and Truitt and Graham opened fire on the undercover agents in the car, hitting one of the agents in the chest and arm.

King and the Dolton man were arrested at the scene, but Graham got away.

Kirsch said that even before the shooting, the suspects, all convicted felons, had intended to traffic illegal guns and possibly transport them from Indiana into Illinois. Kirsch said his office has pledged to crack down on gun crime and felons in possession of guns.

"The conduct of these defendants is completely intolerable," Kirsch said.

Kirsch couldn't say whether or not the suspects knew about the undercover operation.

The agent who was wounded was taken to the hospital in critical condition, but his condition has since been stabilized and he is expected to make a full recovery.

Graham and King face up to life in prison if convicted in the case. They could face additional charges once federal prosecutors seek a formal indictment.

Celinez Nunez, special agent in charge of the ATF Chicago Field Division, said the agency is offering a $25,000 reward for information leading to Graham's arrest. Anyone with information on Graham's whereabouts should call the ATF tip line at 1-800-ATF-GUNS, or email atftips@atf.gov.