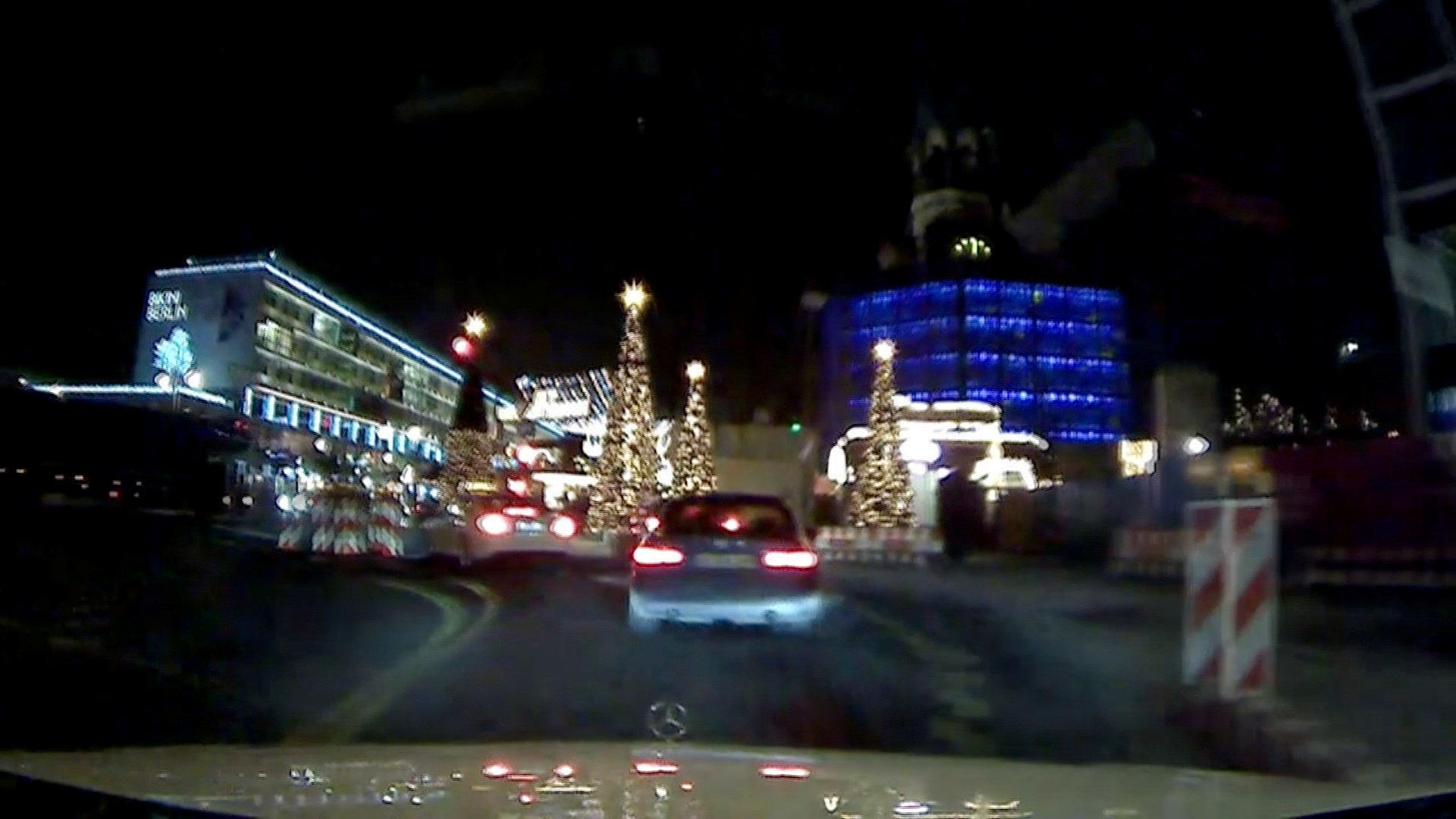 BERLIN -- German officials presented mounting evidence Thursday that Anis Amri was behind the wheel of a truck that smashed into a Christmas market in Berlin, killing 12, as authorities across Europe pressed ahead with their feverish manhunt for the 24-year-old Tunisian, who has evaded capture since the attack.

Newly-released dashcam footage from the scene shows the car speeding toward the market, and then people running away.

Police raided properties in Berlin and the western state of North Rhine-Westphalia where Amri is believed to have spent time. They also swooped on a bus in the southwestern city of Heilbronn after receiving a tip that turned up nothing.

No arrests were made, said Frauke Koehler, a spokeswoman for federal prosecutors.

Even so, investigators were increasingly confident that Amri carried out the rampage after finding his fingerprints in the cab of the truck that had been hijacked shortly before Monday’s attack.

“We can tell you today that there are additional indications that this suspect is with high probability really the perpetrator,” Interior Minister Thomas de Maiziere said after visiting the Federal Criminal Police Office along with Chancellor Angela Merkel.

“Fingerprints were found in the cab, and there are other, additional indications that suggest this,” he told reporters. “It is all the more important that the search is successful as soon as possible.”

German authorities have been on the defensive after it emerged that Amri had been considered a potential threat for months, subjected to surveillance and put in pre-deportation detention in August only to be released again due to paperwork problems.

The fact that the attack is alleged to have been carried out by a man who came to Germany seeking asylum last year also prompted fresh criticism of Merkel’s decision to allow hundreds of thousands of migrants into the country without thorough security checks.

While police have noted that most migrants are law-abiding, a number of high-profile crimes, including the New Year’s Eve assaults in Cologne and several violent attacks over the summer have stoked anti-migrant feeling in Germany. Two attacks in July, along with the truck attack in Berlin, were claimed by the Islamic State group.

“We have made great efforts in recent years to better prepare for terrorist threats,” Merkel told reporters. “This makes me confident that we will withstand the test that we now face.”

While members of Merkel’s party have called for tighter asylum laws and a crackdown on potential extremists in the wake of the attack, the chancellor appealed once more for calm.

“I want to say how very proud I’ve been in recent days that the great majority of people have reacted soberly,” she said.

At the site of the bloodbath, Berliners made a show of defiance. Vendors reopened their stalls at the Christmas market next to the Kaiser Wilhelm Memorial Church even as police placed concrete blocks by the roadside to provide extra security.

In tribute to the victims, organizers decided to do without festive music and bright lights. Berliners and visitors placed candles and flowers at a makeshift shrine for the victims .

Berlin’s state Health Ministry raised the number of injured in the attack to 56, saying some victims went to hospitals on their own.

The agency said 12 people were being treated for severe injuries, with some still in critical condition. Another 14 people with less-serious injuries remained hospitalized and 30 others had been discharged.

CBS affiliate KDBC reported that Richard Ramirez, initially of Texas, is among the victims in the attack.

Ramirez’s brother Armando told KDBC that Ramirez suffered major injuries and his partner, who also lived in Berlin, did not survive the attack.

German authorities have offered a reward of 100,000 euros ($105,000) for information leading to Amri’s arrest, but they warned he could be “violent and armed.”

In Tunisia, Amri’s brothers spoke to The Associated Press, urging him to surrender to authorities. “Whether he did it or not, I ask him to report to the police. We are suffering because of him,” said Abdelkader Amri.

Abdelkader Amri questioned if his brother had been involved in the attack in an interview with Agence France-Presse. “I’m sure he can’t have done this, that’s not why he emigrated. May God reveal the truth  … “If my brother is behind the attack, I say to him: ‘You dishonour us.’”

Another brother, Walid, said Amri may have been radicalized in prison in Italy, where he went after leaving Tunisia in the wake of the 2011 Arab Spring uprisings.

Italy’s Justice Ministry confirmed reports that Amri was repeatedly transferred among Sicilian prisons for bad conduct, with prison records saying he bullied inmates and tried to spark insurrections. He served 3½ years for setting a fire at a refugee center and making threats, among other things - but Italy apparently detected no signs that he was becoming radicalized.

Amri’s mother, Nour El Houda Hassani, insisted he had shown no signs of radicalization and questioned whether he was really the market attacker. Speaking in the central Tunisian town of Oueslatia, she said poverty drove Amri to steal and to travel illegally to Europe.

“I want the truth to be revealed about my son,” she said. “If he is the perpetrator of the attack, let him assume his responsibilities and I’ll renounce him before God. If he didn’t do anything, I want my son’s rights to be restored.”