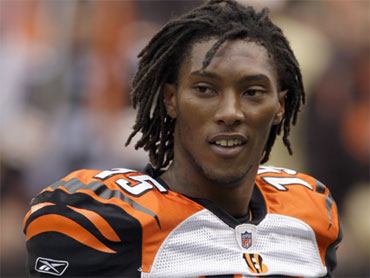 Cincinnati Bengals receiver Chris Henry suffered serious injuries after falling out of the back of a pickup truck during a domestic dispute with his fiancee, police said Wednesday.

Henry was found in the road in south Charlotte "apparently suffering life-threatening injuries," according to Charlotte-Mecklenburg police. Henry was transported to Carolinas Medical Center, the local trauma unit, but spokesman Scott White said he was not listed in hospital records and had no other information.

Police said a dispute began at a home just before noon and Henry jumped into the bed of the pickup truck as his unidentified fiancee was driving away from the residence.

"The domestic situation continued between the operator and Mr. Henry," the police said in a statement. "At some point while she was driving, Mr. Henry came out of the back of the vehicle."

Henry was found on a residential street about a half mile away from the home when police were called to the scene after a medic report that a man was down.

Henry broke his left forearm during a win over Baltimore on Nov. 8, had surgery and was placed on season-ending injured reserve. Charlotte is home to his fiancee's parents, the Bengals said.

Team spokesman Jack Brennan said he had little information other than Henry was badly hurt.

"We are aware he was in an accident and that his injuries are very serious," Brennan said. "We are obviously staying in touch with the situation and are ready to offer whatever assistance we can."

Henry is in the final year of his contract with the Bengals, who let him go after his fifth arrest following the 2007 season. Owner Mike Brown then brought him back a few months later, signing him to a two-year deal, and Henry had stayed out of trouble since his return.

A deep threat, he was fourth among Bengals receivers this season with 12 catches for 236 yards and two touchdowns at the time of his injury.