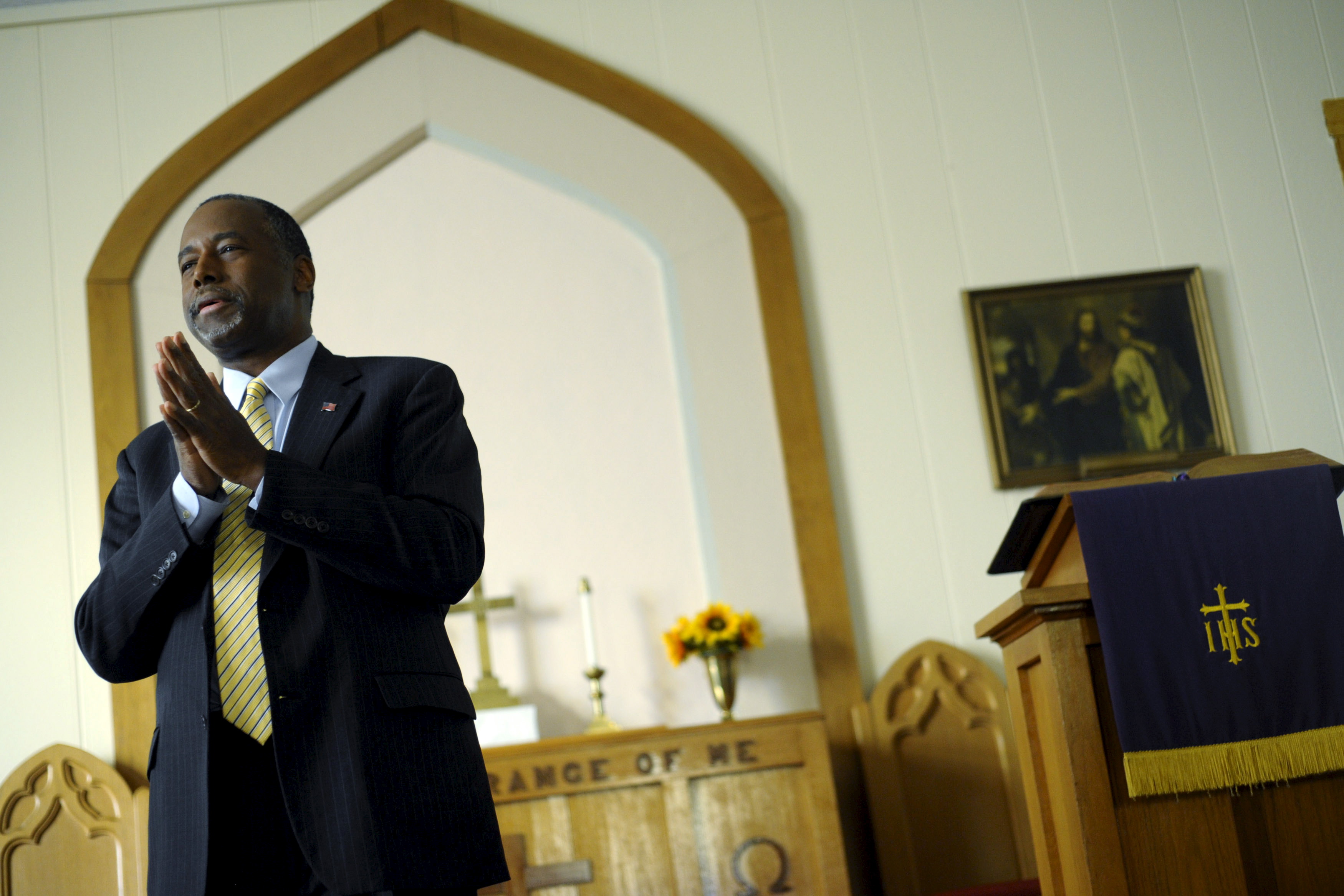 The day before two polls showed his support waning in Iowa, Ben Carson spoke to over 1,000 churchgoers at the Cornerstone Family Church services in Des Moines on Sunday. God owns the universe, Carson said. "That is why I seem to have a calm demeanor all the time," Carson said. "[P]eople mistake that for softness, but what it really is -- is confidence in the Lord, recognizing that if God is for you who can be against you. It really doesn't matter what the issue is."

That kind of fatalism caused those at the services to describe him admiringly as "called" and "deeply religious," but he didn't appear to winning the unequivocal support of many members of the congregation.

"I can't say yes or no right now," said caucus goer Donna Jones when asked if Carson was her favorite GOP candidate. Jones, who has supported Mike Huckabee in the past, has not yet decided who she will caucus for in February. She stood alongside other churchgoers who said they'd "consider" Carson but also mentioned Trump, Rubio and Cruz as candidates who are also piquing their interest.

Two polls out Monday showed Cruz gaining in Iowa. In the Monmouth Poll Cruz surpassed Trump as the leader of the pack amongst Iowan caucus goers while Carson fell to 13 percent, a 19-point decline since Monmouth's October poll.

Both polls showed Carson's support among evangelical voters -- a group he garnered 36 percent support from in September -- in decline while Cruz's support in this lane surged. These voters, according to the Monmouth poll, now back Cruz (30 percent) over Trump (18 percent), Rubio (16 percent), and Carson (15 percent). Maintaining evangelical support is a key factor in the Iowa caucuses, since evangelicals account for about half of the Iowa GOP caucus electorate.

Cornerstone Family Church in Des Moines is diverse and nondenominational, with a congregation that is about half African-American.

Jill White, the mother of 8 racially-mixed children, stood in line to get a burger at the Carson campaign's tailgate after service. The West Des Moines native believes Carson could have a positive impact on her children, as a conservative African American leader.

"We should be considering African American presidents," White said. "We just can't have the one that we have right now." And further, she said firmly, "We need a Christian in office." And yet, asked who she supports, White said she didn't know yet.

The Carson campaign has been making a concerted effort with this group of voters, and the Church tailgates show that. The campaign bus, wrapped in the Carson campaign logo, and campaign volunteers go to Iowa churches almost every weekend to spread the word about their candidate. Last week, Carson himself also visited churches in the state, and he plans to attend more services in Iowa through the caucuses.

"One of the places where I am most comfortable is in a church," Ben Carson tells congregants across Iowa.

"He loves the chance to go to church. Unlike some other candidates who want to use church, Ben is someone who is genuine," explains Ryan Rhodes, Carson campaign Iowa state director. "It is where he wants to be."