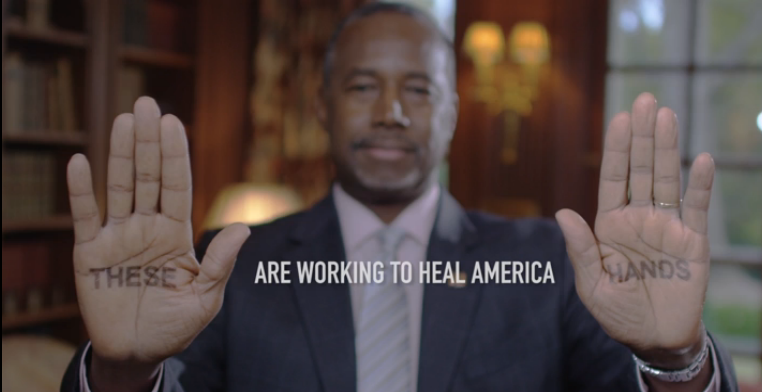 The 60-second ad entitled, "These Hands" is slated to air for three weeks in the Iowa and South Carolina broadcast markets and features individuals standing in front of familiar American backdrops like the Brooklyn Bridge in New York and the "Welcome to Fabulous Las Vegas" on the Vegas Strip. They have the words "These Hands" printed on their raised palms along with their varied occupations and accomplishments.

What comes as a stark contrast to Carson's previous ad, entitled "Winning, Not Whining," where he slammed what he called the "failed tough-talk but do-nothing policies" on Syria of President Obama and Democratic presidential candidate Hillary Clinton. In this ad, he stands silently like the other people, with his palms raised so they form the words, "These Hands Are Working to Heal America."

Carson campaign spokesman Doug Watts suggests that this "everyday American ad" will resonate with voters because of its unifying message.

"It's got an appealing human element to it which is the hallmark of Dr. Carson," said Watts. "It shows the real heroes of America are the people that are everyday Americans that use their hands and wits to make this country great," he added.

A Carson spokesman, who would only characterize the ad buy as "significant", said the campaign expects the ad will be "well-received" and leave a "positive impression" on voters in the early caucus and primary states. The campaign used the hashtag #thesehands at the end of the ad in hopes that it will go viral on the social media.