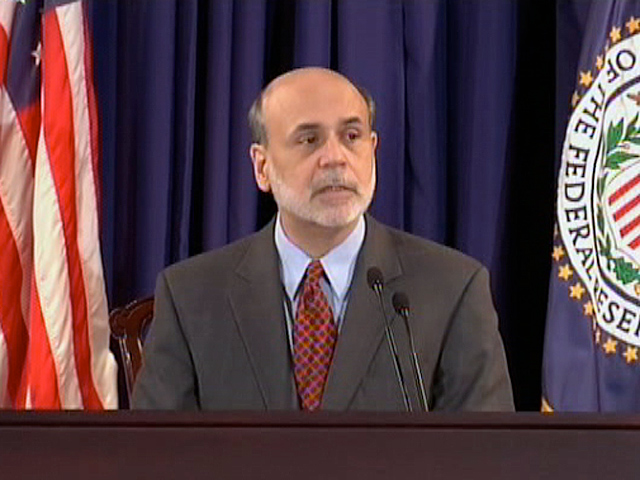 Democrats and their supporters have been crying out about Washington's lack of job creation, while Republicans are also concerned about blowing up the government's balance sheets.

In his first-ever public news conference, Federal Reserve Chairman Ben Bernanke revealed how the Fed has walked a fine line between both concerns.

The Federal Reserve announced today that it is on track to end its Treasury-bond-buying program -- a program intended to stimulate the economy and create jobs but that received serious blowback from Republican politicians concerned about inflation.

Bernanke danced around tough questions today about why job creation has been so slow.

"We've made a lot of progress," Bernanke insisted, even as he acknowledged that there are still 7 million fewer jobs than before the economic crisis. He said the Fed went to "extraordinary measures" to try to create jobs with its security purchases. But, he added, "We were very clear this was not going to be a panacea and was only going to turn the economy in the right direction."

That's unlikely to appease those who represent the labor force, like the AFL-CIO, which has kept the Fed on the hot seat, insisting on "keeping the agenda focused where it should be--on creating jobs, investing in America's future and rebuilding our middle class."

Bernanke explained that the Fed is ending the program because of inflationary pressures.

"Why not do more? The trade offs are getting less attractive at this point," Bernanke said. "It's not clear we can get substantial improvement in payrolls without some inflation risk... We've got to keep inflation under control."

That move could appease Republicans who at a House Budget Committee hearing in February decried the program. The Associated Press reported at the time that Rep. Paul Ryan (R-Wis.), head of the committee, said he was worried the Fed wouldn't be able to detect inflation until "the cow is out of the barn" and was already spreading dangerously through the economy.

Even as he defended the Fed's concerns about inflation, Bernanke said that the current inflation rate isn't a concern. For now, the Fed will reinvest its bond holdings, keeping interest rates low, but will tighten its interest rate policy eventually, depending on inflation and economic growth.