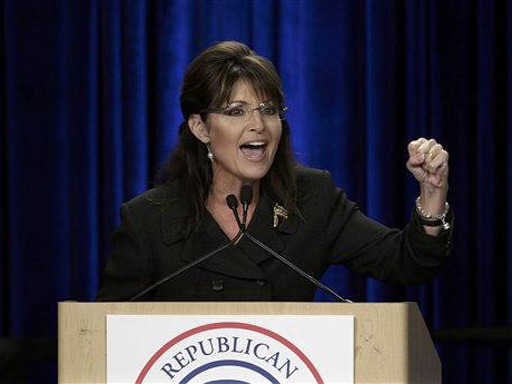 In remarks at a trade-association convention in Phoenix today, former vice presidential candidate Sarah Palin will urge Federal Reserve chairman Ben Bernanke to "cease and desist" buying up government debt, according to the National Review, which obtained a copy of her prepared remarks for the event.

"I'm deeply concerned about the Federal Reserve's plans to buy up anywhere from $600 billion to as much as $1 trillion of government securities," Palin's prepared remarks read. "What's the end game here?... All this pump priming will come at a serious price."

The speech is planned just days before President Obama will appear at the G20 summit in South Korea, which will likely address criticism from representatives of Germany, Brazil, China and South Africa regarding the Federal Reserve's recent decision to pump $600 billion into the U.S. economy.

But in India today, President Obama defended his backing of the decision, and said that the Fed's intent was to foster economic growth on a global scale.

"The worst thing that could happen to the world economy, not ours, not just ours, but the entire world's economy, is if we end up being stuck with no growth or very limited growth," Obama said at a press conference. "And I think that's the Fed's concern, and that's my concern as well."

Mr. Obama also pointed out that, as an independent body, the Fed "doesn't take orders from the White House" - but some have wondered if a Republican-dominated Congress will indeed impact the direction it takes in coming years.

David Wessel, the economics editor of The Wall Street Journal, said in an interview on NPR that he doubted that the impending change in congressional makeup would have much of an effect.

"The Fed was created by Congress; it's accountable to Congress, and it knows that Congress, if it wants, can change the law - so it can never completely ignore Congress," Wessel said. "But when it comes to monetary policy, when it comes to setting interest rates, or buying these hundreds and billions of dollars worth of treasury debt, it is pretty darn independent, and there really isn't any reason to believe that the change in Congress is going to change that."

Incidentally, Texas Republican Ron Paul (father of the recently-elected Kentucky Senator Rand Paul) -- who has famously called for the abolition of the Federal Reserve -- is likely to head the committee that oversees it: Paul is the ranking Republican on the Subcommittee on Domestic Monetary Policy and Technology on the Financial Services, a subdivision of the House Financial Services Committee, which supervises the Federal Reserve, the U.S. Mint and U.S. involvement with international development groups. Unless Paul is challenged for the spot, he is likely to become chair of the committee.

The elder Paul might not be the only one with a say in the future of the Fed: the Wall Street Journal reports that Senator-elect Rand Paul, who campaigned against Bernanke's renomination, has a "decent chance" of earning a spot on the Senate Banking Committee.