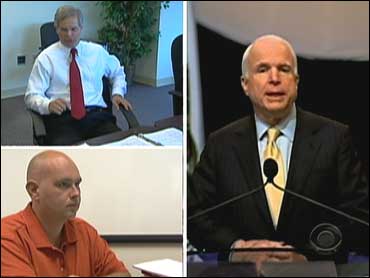 Earlier this year, CBS News took you inside Barack Obama's presidential campaign. Now, CBS News anchor Katie Couric takes an exclusive look at the back-room warriors of the Republican candidate. They are men and women working 24/7 toward 11/4 - Election Day.

Sen. John McCain has a message that's defined, defended and disseminated daily by an army of about 400 at the McCain headquarters in Arlington, Va.

This campaign is led by not one, but two generals. The first: an operative skilled in tactics and mechanics, honed as campaign manager for Arnold Schwarzenegger, Couric reports.

"I work to run the day to day operations of the campaign and I'm involved in the strategy talking to Sen. McCain, help directing the activities here at the campaign headquarters and out across the nation to help deliver the Senator's message," Senior Advisor Steve Schmidt said.

The campaign's other commanding officer is a longtime ally. He's fought many political battles alongside McCain, including his presidential run in 2000.

"Why do you think you've lasted so long? What is it about you?" Couric asked Rick Davis, McCain's campaign manager.

"I don't know. I just, I keep showing up. You know, nobody tells me to leave. So at seven o'clock in the morning I'm here and trying to do what I can to help the campaign," Davis said.

"Is it a problem to not have a single person who is in charge of the entire operation?" Couric asked.

"You know if you dial it back a couple of weeks, I was doing all of it," Davis said. "I went to McCain and said look, I need help."

"This is an area that we call our war room," Davis pointed.

The war room and its lieutenants are on defense, charged with monitoring the non-stop media coverage ... with plenty of sugar and caffeine at the ready.

"We've got three shifts," said the war room director, Aaron Harrison. "The morning shift starts at 6, they go till mid-afternoon and then we switch over. We've got a night crew that comes in."

The communications team plays offense, making sure the candidate's message is relayed and repeated.

In the modern media age, the points and counterpoints come fast and furious through every conceivable outlet.

"Do you think you need to have your taxes raised? I'm not your candidate. Sen. Obama is," McCain said on a campaign bus.

The campaign tries to reach out to various voting blocs like women, Hispanics and African-Americans. The efforts are coordinated by National Coalitions Director Aaron Manaigo.

"You're an African-American man and supporting John McCain obviously. Do your friends give you a hard time at all?" Couric asked him.

"No. Absolutely," Manaigo said. "Most of my friends like John McCain. In any other election year, they would probably be right here working with us."

A regiment of advance personnel choreographs every detail of every trip and appearance.

"We basically track the senator around the country," said Davis White, the campaign's director of advance. "You see that board over there. The jet is where the senator is."

Couric looked at it, saying, "this little jet?"

"That's where it is," White said. "Today he landed in Michigan. We're going to do a quick OTR stop - a quick-off-record stop - at a little hot dog place."

Another challenge for the advance team: orchestratrating the events that McCain has made his trademark - Town Hall meetings.

The communications team back at headquarters, and traveling with the candidate, constantly looks for ways to refine and strengthen his message.

In a phone call, senior adviser Nicolle Wallace said to McCain communications director Jill Hazelbaker: "I think we need to take the transcript of what he said at the top and take a look at that and incorporate what he said as examples."

Hazelbaker replied: "I think so. I also liked the idea of as much as we can, getting the real people examples."

And at a campaign event, McCain said: "I met a guy who owns two trucks and he said he could stay in business if he didn't have to pay 25 cents a gallon tax extra on diesel fuel."

But the mother of all appearances will be in Minneapolis in September - when McCain accepts his party's nomination.

And the pressure is on Senior Adviser Mark Salter. He has co-written five books with the senator, and on the day Couric spent at campaign headquarters, he was heading to Maine to work on perhaps the biggest speech of his life.

"Do you have any ideas?" Couric asked.

"Not a one to be honest with you," Salter said.

"Well, we haven't had a meeting about it yet, and I don't want to be presumptuous," he said. "But, you know, I think any good acceptance speech gives you a real good sense of the guy who is asking to be president of the United States."

"At this point, can you write in his voice pretty well?" Couric asked.

But they want his voice to be heard - and when it is, they thing there's too much focus on staff shakeups and potential conflicts of interest.

Campaigns, warts and all, are watched and dissected more than ever before. And the McCain team is doing its best to adapt to this increasingly complicated battlefield of modern political warfare.

"Campaigns used to be mysteries," Davis said. "Nobody ever saw the inside of a campaign and it used to be a bunch of old guys like me sitting around with cigars, you know dreaming up things to do. And now it's like we're on all the time."

And it's worth noting the campaign not only plans every move John McCain makes, but also campaign events for his wife, his kids, and - soon - his running mate.