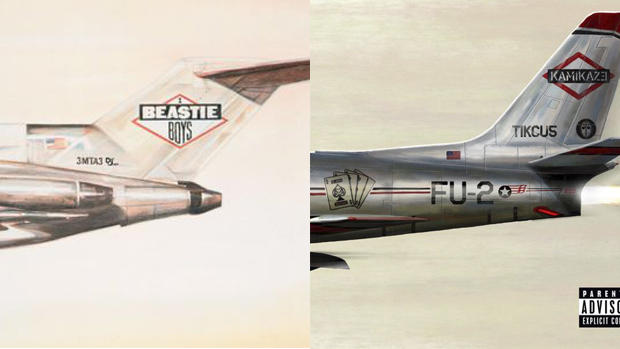 The Beastie Boys are speaking out about Eminem's album cover for "Kamikaze," which clearly borrows from their cover for 1986's "Licensed to Ill." Michael "Mike D" Diamond and Adam "Ad-Rock" Horovitz talked to CBS News' Anthony Mason in a new interview to promote their upcoming book, "Beastie Boys Book."

Both "Kamikaze" and "Licensed to Ill" feature the tails of black and silver airplanes in their artwork, with similar framing and backgrounds. Diamond and Horovitz said they're "flattered" by the imitation. Diamond said, "It's an obvious -- to me -- an homage." But when Diamond pointed out to Horovitz that Eminem "disses a lot of people" in the album, Horovitz responded, "Oh, well then, that's not so nice."

"But he doesn't diss us," said Diamond, laughing.

Eminem dropped "Kamikaze" on Aug. 31, late at night. At midnight on the East Coast, he tweeted the link to the album and wrote, "Tried not 2 overthink this 1... enjoy" along with a middle finger emoji. Eminem teamed up with longtime collaborator Dr. Dre to executive-produce the album. The 13-track album features artists Joyner Lucas, Eminem's manager Paul Rosenberg, Royce Da 5'9" and Jessie Reyez.

Watch the full interview on "CBS This Morning" on Oct. 30.