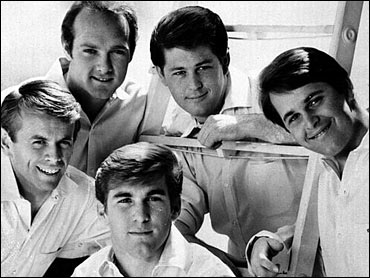 After 44 years, The Beach Boys are finally releasing "Smile," the most famous unfinished rock 'n' roll album in history.

But, as it turns out, those masters -- rock 'n' roll's ultimate buried treasure -- were safe and sound in a Capitol Records vault, waiting to be released.

Wilson says the music was shelved in 1967 because "it wasn't appropriate music for the times."

"It was too far advanced," he told CBS News. "I didn't think (audiences) would appreciate it at all. ... For the 'Smile' album, I was trying to capture the mood of early Americana, and mid-Americana and Hawaii as a third movement."

Jason Fine, editor at large of Rolling Stone magazine, said, "Brian had stopped touring in '64. So to Brian, the studio was really his band. He combined different kinds of instrument that no one of would have ever even thought of, a French horn and a tuba and a harmonica."

Wilson told Tracy Phil Spector's work was a "total inspiration," as well as that of The Beatles and Chuck Berry.

But The Beach Boys faced stiff competition at the time from The Beatles.

When asked who won the battle, Wilson said, "Nobody won. It's no contest. A guy who could write 'Let It Be,' how could he be jealous of The Beach Boys, you know what I mean?"

Tracy remarked, "Yeah, but the same guy says that 'God Only Knows' is the best song ever written so..."

Wilson replied, "Right. So we're proud of each other in that sense."

But back when he was writing the album, competition was fierce, and the direction Wilson was taking the band's wholesome California sound in was considered weird, a freak-out.

Wilson says that, at the time, the band was on drugs. "First of all, we got stoned on our asses on drugs," he said. "And we didn't know what to think."

Domenic Priore, The Beach Boys biographer, remarked, "'Smile' was definitely a psychedelic rock album prior to 'Sargent Pepper's Lonely Hearts Club Band.' It was a complete statement, where every single song was a three-dimensional trip, so-to-speak."

Fine said, "This was pretty far out for a family of pretty conservative guys in striped shirts from Southern California at that time."

Under the pressure of producing their next hit and rejection of his music, Wilson suffered a mental breakdown.

Today when Wilson listens to the album, he said, he thinks, "'How could we have created such a work of art? We must be the greatest young guys around here,' you know?"

And now, Wilson said he thinks audiences will also -- finally -- appreciate their work. "The generations have grown, and they're able to listen to hear music on a higher level now," he said.

As for how he'll be remembered in music history, Wilson said he thinks of himself as someone who has left behind "something that people will cherish for a long time."

Wilson is currently at work on his next rock album. Last month, he released "In the Key of Disney," a collection of songs from seven decades of Disney films.