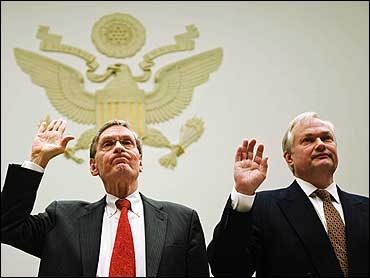 Barry Bonds' team should have reported concerns about the home run king's personal trainer to Major League Baseball, commissioner Bud Selig told Congress on Tuesday during a hearing on the sport's steroids era.

CBS' Radio's Bob Fuss reports the hearing started with a surprise: Chairman Henry Waxman asking for a perjury investigation into former AL MVP Miguel Tejada's claim he knew nothing about steroid use.

Waxman then turned the focus to former Senate majority leader George Mitchell's report on baseball's steroids era. Mitchell named 80 players in the report, including Roger Clemens, who denied steroid use on "60 Minutes".

Even though no players were present, unlike the theatrical March 2005 session, the names of Bonds, Clemens and Tejada all were raised during the 4-hour, 15-minute proceedings prompted by last month's Mitchell Report.

Selig and union leader Donald Fehr sat side-by-side before a House committee friendlier in tone than three years ago yet still concerned about how serious baseball is in dealing with its doping problem.

Before any of Tuesday's testimony, which began with former Senate majority leader George Mitchell appearing for two hours, House Oversight and Government Reform Committee chairman Henry Waxman announced he and ranking Republican Tom Davis asked the Justice Department to look into whether Tejada lied to committee staffers when questioned in connection to Rafael Palmeiro's perjury case in 2005.

Tejada's older brother, Freddy, was killed Tuesday in a motorcycle accident in the Dominican Republic, said the Aguilas Cibaenas, the shortstop's winter league team. Tejada, who had been scheduled to play Tuesday night, wasn't at the ballpark and could not immediately be reached for comment.

Since the release of Mitchell's findings, the focus largely has been on Clemens, the star pitcher scheduled to testify at a separate hearing Feb. 13, along with his former trainer, Brian McNamee, who said he injected Clemens with steroids and human growth hormone.

Clemens has vehemently denied the allegations.

But Bonds was brought up by Waxman, who asked Selig whether the San Francisco Giants should have reported their concerns about Bonds' trainer, Greg Anderson, and the slugger's alleged steroid use to the commissioner's office.

Pressed by Waxman about whether Giants general manager Brian Sabean violated baseball rules by not doing so, Selig said: "It's a matter that I have under review," perhaps hinting that Sabean or other team officials could face discipline.

The chairman pointed to the portion of the Mitchell Report that discussed how former Giants athletic trainer Stan Conte told Sabean in 2002 that a player had come to him with questions because he was considering buying steroids from Anderson.

The report said Conte went to Sabean to say he wanted Anderson and others like him removed from the clubhouse. Sabean wasn't willing to do it, according to the report.

Waxman also expressed concern that, according to the report, Giants owner Peter Magowan's lawyer called Mitchell to say Magowan "misspoke" about Bonds' possible use of steroids.

"This incident shows why it's important for baseball's management to take the problem of steroids seriously. It's possible that the BALCO scandal could have been averted if Brian Sabean and Peter Magowan acted in a responsible fashion," Waxman said. "Instead, they seemed more intent on protecting Bonds."

Earlier, the commissioner said that if, aside from players, "there were club personnel - and there have been some serious accusations there - if those people are guilty of what was said they were doing, they will face discipline, and very significant discipline."

Giants spokeswoman Staci Slaughter said Sabean and Magowan were out of town. The team was still deciding whether to release a statement.

One congressman questioned all of the day's witnesses about a potential loophole in baseball's drug policy, which was toughened in the aftermath of the 2005 congressional hearing. Penalties were increased and amphetamines were banned.

Massachusetts Democrat John Tierney said baseball gave over 100 therapeutic-use exemptions to players for attention deficit disorder last year, up from 28 in 2006. The exemptions enabled players to use stimulants such as Ritalin and Adderall.

The general mood in the room was captured succinctly by Connecticut Republican Christopher Shays, who noted, "This is almost surreal to me."

Selig and Fehr both were praised for recent changes to baseball's drug policy - and chastised for not taking action sooner.

"The illegal use of steroids and performance-enhancing drugs was pervasive for more than a decade, Major League Baseball was slow and ineffective in responding to the scandal, and the use of human growth hormone has been rising," said Waxman, a California Democrat.

"The Mitchell Report also makes it clear that everyone in baseball is responsible: the owners, the commissioner, the union and the players."

Later, Maryland Democrat Elijah Cummings told Selig and Fehr: "This scandal happened under your watch. I want that to sink in. It did. Do you accept responsibility for this scandal or do you think there was nothing you could do to prevent it?"

Selig then followed, starting by saying he's agonized over the question.

"Do I wish we could have reacted quicker? Should we have? One could make the case," the commissioner said. "All of us have to take responsibility, starting with me."

In his opening statement, Selig vowed to develop a program "to require top prospects for the major league draft to submit to drug testing before the (amateur) draft." He also reiterated his willingness to support use of a test for human growth hormone "when a valid, commercially available and practical test for HGH becomes reality, regardless of whether the test is based on blood or urine."

Fehr, in turn, said the union has agreed to "allow players to be suspended for HGH use based on evidence other than a positive test, a so-called 'non-analytical' finding."

He and Selig said they met in December to discuss the Mitchell Report's investigations and plan to meet again.

"I hope we have all of this completed before spring training," Selig said.

It took more than 1½ hours for the first mention of Clemens, who has denied McNamee's charges in various forums.

"We believe that the statements provided to us were truthful," Mitchell said.

Mitchell was asked why he did not address amphetamine use in his report ("They were outside the mandate of our investigation"); what level of help he received from the union ("The players' association was largely uncooperative"); and why he did not agree to a request by The Associated Press to turn over evidence he gathered ("The responsibility for the disclosure of those documents rests with those who are the possessors and owners of the documents").

Said Davis, who chaired the 2005 hearing: "Our work here is definitely not done. ... But as a panelist at our last baseball hearing famously said, 'We're not here to talk about the past.' ... Going forward, what will the leaders of baseball do to implement the recommendations outlined in this report?"

The Mitchell Report connected more than 80 players to allegations about performance-enhancing drugs.

Congress began focusing on steroids in baseball in 2005, after the publication of Jose Canseco's book, "Juiced." At the March 2005 hearing, Palmeiro said under oath, "I have never used steroids, period." He was suspended by baseball later that year after testing positive for a steroid.

When the committee looked into whether Palmeiro should face perjury or other charges, it spoke to Tejada, who at the time was a Baltimore Orioles teammate of Palmeiro's. Palmeiro said his positive test might have resulted from a B-12 vitamin injection given to him by Tejada, and the committee concluded their was insufficient evidence to refer Palmeiro's case to the Justice Department.

In Mitchell's report, Adam Piatt, Tejada's former Oakland teammate, said he provided Tejada with steroids and HGH in 2003. Mitchell also included copies of checks allegedly written by Tejada to Piatt in March 2003 for $3,100 and $3,200.

"We will review and respond to the letter from Chairman Waxman and Rep. Davis," Justice Department spokemsan Peter Carr said.