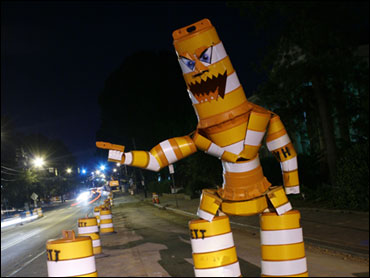 (AP Photo/Joseph Carnevale)
RALEIGH, N.C.(CBS/AP) It's a big disappointement for fans of the barrel monster. A North Carolina college student who created the barrel monster out of traffic materials has been sentenced to community service for the act.

Multiple media outlets reported that Joseph Carnevale was sentenced Tuesday to 50 hours of community service for taking the traffic barrels from roadside construction near the North Carolina State University campus in May.

Carnevale was arrested June 10 and charged with larceny and destruction of property for reassembling the barrels into a 10-foot monster. Community and online fans from all over the world pledegd their support for Carnevale and urged that the charges be dropped.

They argued that the figure had artistic merit and was a welcome humorous distraction on the North Carolina roadways.

Raleigh police dismantled the barrel monster shortly after discovering it.

Carnevale's charges will be dismissed if he completes the 50 hours. He is scheduled to appear in court Oct. 30.