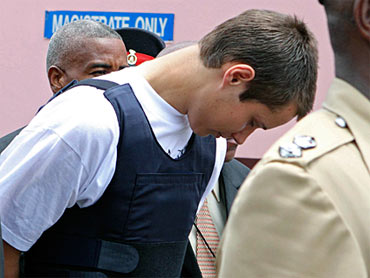 The teenager who authorities call the "Barefoot Bandit" was set to face an initial court appearance Wednesday in Miami, a day after he was deported from the Bahamas.

It's likely Colton Harris-Moore will eventually be taken to Seattle, where he was indicted.

Law enforcement officials escorted Harris-Moore on a commercial flight to Miami on Tuesday to face prosecution for a two-year string of break-ins and plane thefts across the United States. The FBI took him off the plane and put him into a waiting car.

The 19-year-old convict was deported to the United States, just hours after he pleaded guilty to a minor offense in the Bahamas, where he was arrested over the weekend.

Harris-Moore was on the plane with Bahamian authorities as well as FBI agents, but he did not know FBI agents were aboard, said John Gillies, FBI special agent in charge of the Miami office. The FBI did not have any authority to arrest Harris-Moore in the Bahamas and waited until he reached Miami to take him into custody, Gillies said.

Earlier Tuesday, Harris-Moore pleaded guilty in the Bahamas to illegally entering the country. He had been arrested in the island country Sunday following a high-speed boat chase.

The charge stemming from his alleged crash of a stolen plane on Great Abaco Island carried a $300 fine. His lawyer, Monique Gomez, said the U.S. Embassy would pay it. Gomez said Harris-Moore wanted to go home.

More on the "Barefoot Bandit":

The shackled teen smiled after the judge read the sentence. Bahamian police had earlier said he would face other charges including illegal weapons possession related to a string of break-ins and thefts during his weeklong hideout in the country.

Harris-Moore wore white sneakers without laces and kept his head down as armed officers escorted him to the courthouse. A police commando unit stood by as authorities put up street barricades ahead of the hearing for the high-profile suspect.

Though Harris-Moore amassed thousands of fans on Facebook, he never wanted the attention his escapades have received, CBS News correspondent Jeff Glor reports.

Authorities say he earned the "Barefoot Bandit" nickname by committing some crimes while shoeless, and in February he allegedly drew chalk-outline feet all over the floor of a grocery store during a burglary in Washington's San Juan Islands.

Harris-Moore is suspected in about 70 property crimes across eight states and British Columbia, many of them in the bucolic islands of Washington state. He is accused of stealing a plane from an Indiana airport to fly to the Bahamas.

"I'm really tired," Kohler said from her home on Camano Island, Washington. "Yes, I look forward to seeing him."

Asked what she planned to say to her son when she saw him, she said angrily, "What kind of question is that?" and hung up the phone.

His arrest came as a relief to people across rural Camano Island, where authorities say he learned to dodge police.

"There's a lot of relief throughout the community," real estate agent Mark Williams said. "I think the man's luck just wore out. You run through the woods long enough, you're going to trip over a log."

Harris-Moore told police in the Bahamas he came to the country, located off the Florida coast, because it has so many islands, airports and docks, according to an officer who spoke on condition of anonymity because he was not authorized to discuss the case.

The teenager claimed he told islanders he was trying to get to Cuba so he could throw police off his trail, but he intended to make his way to the Turks and Caicos Islands southeast of the Bahamas, the officer said.

The suspect learned from the Internet that the British territory has a small police force and no marine defense force, according to the officer.