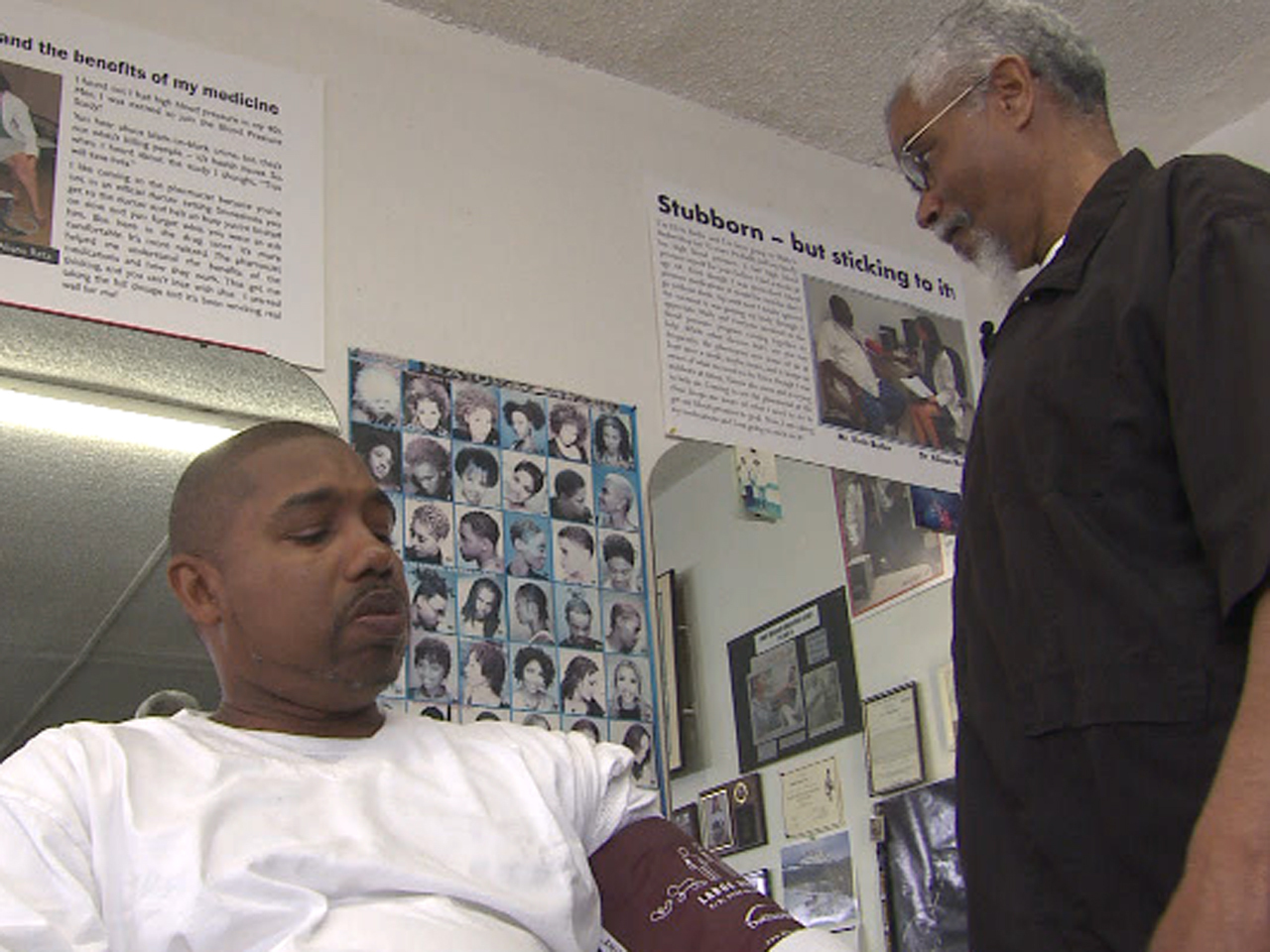 (CBS News) High blood pressure, or hypertension, is among the deadliest conditions for black men. A new study finds many men who are at risk don't even know they have it. But researchers may have found a solution, in a most unlikely place.

At Wally's Barbershop outside Los Angeles, they talk sports, women, and now, health.

Customer Derrick Cobb said, "I tell people, if you go take a walk before you take a drive, you live a whole lot longer."

For the past two years, barber Wally Riddle has offered a shave and a haircut -- and a blood pressure test. And for the most of the customers who've agreed to the tests, the arm cuff has been a change agent.

Dr. Ronald Victor, of Cedars-Sinai Hospital in Los Angeles, said, "The blood pressures have come down tremendously -- on average we've had about 90 percent follow-up. It's really remarkable."

Victor taught Riddle how to take the readings, evaluate them, and make referrals to doctors. He says the program's secret is that it reaches a population that rarely goes in for check-ups. Victor said, "The average man with high blood pressure in this barbershop comes every two to four to six weeks to have their hair cut. I think I'm a pretty nice doctor, but I've never had that kind of patronage in my practice."

Riddle said people "kind of clowned" him when he began offering to check their blood pressure. He recalled, "They said, 'What are you, trying to turn this into a doctor's office?' I said, 'This is for you.'"

An estimated 40 percent of African-Americans have high blood pressure. Black men are three times as likely as white men to die from it, with a heart attack or stroke. Cobb, who is 42, had a shock to his system after his first blood pressure reading. Cobb said, "I had blood pressure so high that the girl who took it thought the machine was broken."

He said he changed his life. "You change your eating habits, you change your stress levels," he said. "No offense ladies, but you gotta calm that down, too. ... It made me aware of life."

It's called "the silent killer." Victor explained, "High blood pressure by itself doesn't hurt, and it silently damages the internal organs for years, sometimes decades, until someone shows up in the emergency room with a heart attack. So it's complicated and I wish we had a magic bullet. In the meantime, we've got the barbershop."

This isn't the first time barbers have practiced medicine. In the middle ages, barber-surgeons cared for soldiers in battle. But while that role would fade, Victor says this one will grow. He already estimates there's some form of barbershop check-up going on in every state.

Victor said, "The idea is to have this adopted by the health care system, so it can be sustained and scaled across the country. That's the real goal is to really have an army of barbers."

So it would seem your friendly barber could be the key to not just looking good, but living longer, too.

For Bill Whitaker's full report, watch the video in the player above.

Young adults unconcerned by virus "may be killing" others
Thanks for reading CBS NEWS.
Create your free account or log in
for more features.
View CBS News In
CBS News App Open
Chrome Safari Continue
Be the first to know
Get browser notifications for breaking news, live events, and exclusive reporting.