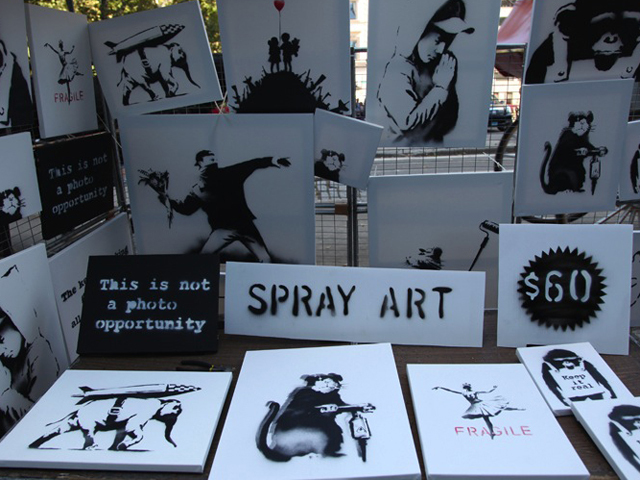 Banksy, the elusive British graffiti artist who has taken up a month-long residency in New York, sold a few of his pieces on the cheap over the weekend.

And by cheap -- we mean $60 apiece. This is the same artist who has sold his art for thousands of dollars, sometimes hundreds of thousands.

Banksy revealed on his website that he had set up a table in New York City's Central Park on Saturday with original signed pieces. "Yesterday I set up a stall in the park selling 100% authentic original signed Banksy canvases. For $60 each," he wrote. But they weren't there for long, apparently. "That stall will not be there again today," he wrote Sunday.

Banksy had an elderly man set up shop at the stall, and according to a video posted on the artist's website, it took about four hours before the man made his first sale. A sign read: "Spray Art. $60."

"A lady buys two small canvases for her children, but only after negotiating a 50% discount," Banksy wrote on the video; the New Zealand woman bought two signed Banksy pieces for $120.

Banksy, who hasn't revealed his real name, has been in New York over the past week or so, creating art on the streets of New York. The results have been showing up all over social media.

Banksy was behind the 2010 Oscar-nominated documentary, "Exit Through the Gift Shop."