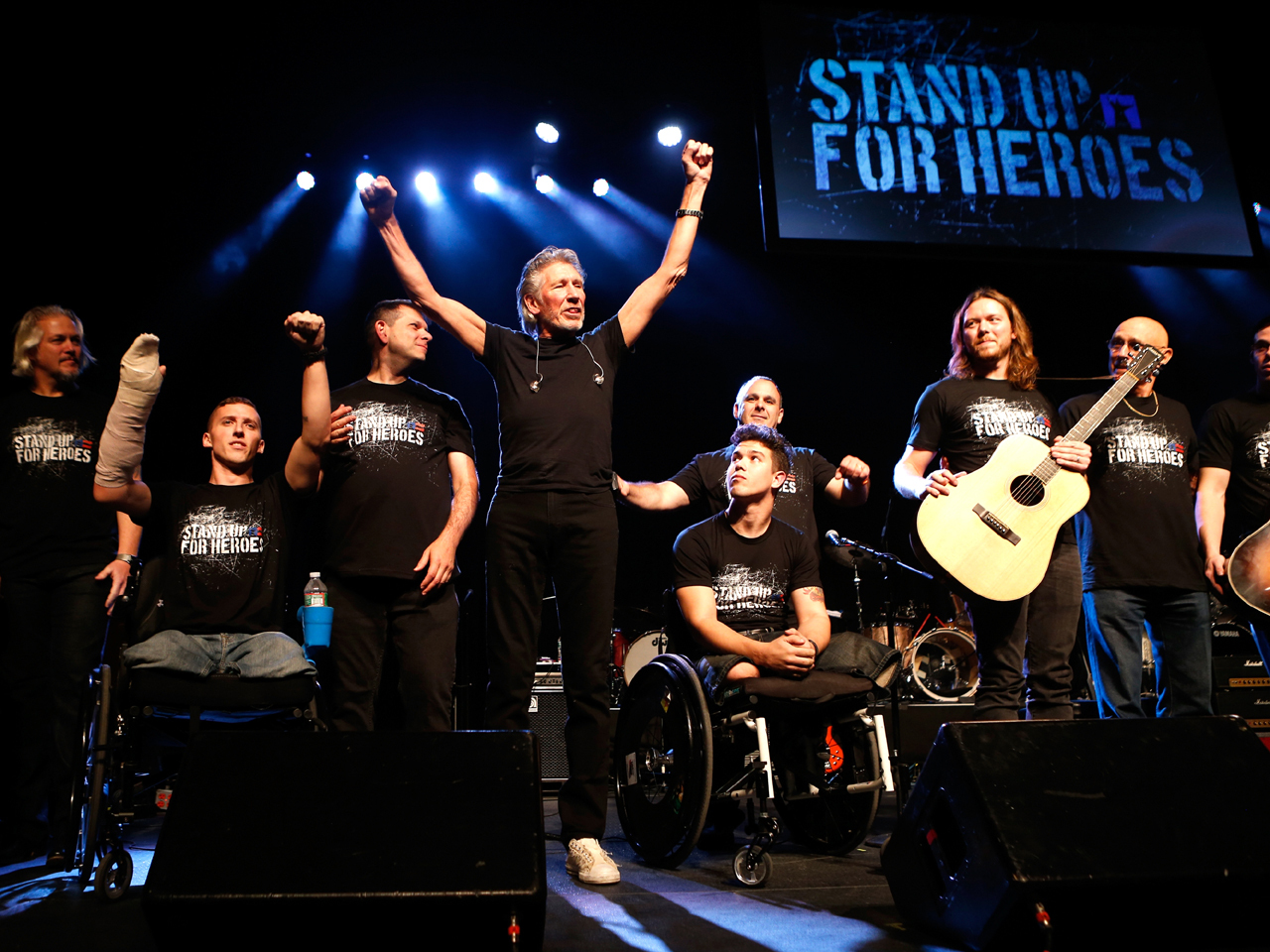 (CBS News) As America prepares to mark Veterans Day tomorrow, we call your attention to a real-life "Band of Brothers." David Martin tells us, despite the wounds they bear from battle, they are determined to make their voices heard:

Marine Cpl. Tim Donley reads from a blog he wrote a year ago when he found out he would probably never regain use of his right arm. Both legs had already been taken by a roadside bomb in Afghanistan, so that right arm meant everything.

"I can't salute," he told Martin. "And I can't shake somebody's hand. You feel helpless and hopeless for a little while, and it stings."

One thing he had not lost was his voice.

Leonard Cohen's "Hallelujah" has become Donley's signature number. And he's getting ready to perform it with Roger Waters, of Pink Floyd fame.

Marcus Dandrea, another double-amputee, is on bass, and the whole rhythm section is wounded warriors.

Dandrea has been taking lessons since January.

"Here you are, not having taken lessons for a year yet, and you're about to go rehearse with one of the legends of rock and roll," said Martin.

"Right, it's pretty amazing. It's one of the greatest opportunities I've ever had."

It was Waters who had the inspiration to perform with this wounded warrior band, an inspiration which came from the same place his rock and roll anthem "The Wall" came from -- suffering great loss.

"I grew up with that, with the loss of those two men," he said, "never knowing either of them, really."

Juan Dominguez lost both legs and an arm in Afghanistan. Back in the day, he had played a pretty mean guitar in a heavy metal band. He could never do that again -- but he didn't want to live without music.

And then he met Roger Waters.

"I introduced myself and got talking about music," he told Martin.

Dominguez said, "I fell in love with drums and kind of haven't looked back."

Bob Woodruff, the ABC News correspondent who suffered a severe head wound in Iraq, hasn't looked back, either. He and comedy impresario Caroline Hirsch organized a wounded warriors concert to kick off the New York City Comedy Festival.

But there would be no band without Arthur Bloom, a Juilliard-trained musician who teaches music at Walter Reed. "This is not Kumbaya," Bloom told Martin. "This is rigorous, high-level music learning. We roll up our sleeves. They roll up their sleeves and they get to work.

"This is not about music lessons; it's about recovering from unbearable loss. "Battlefield medicine has gotten better and better. It's a miracle what they're able to do. But what that also means is that the people they're saving are increasingly injured."

"What you're doing here is unbelievable," said Yo-Yo Ma, "because it transcends all the moments from before and you're getting to a fantastic place."

Josh Cawthorn lost both his best friend and his right eye to a roadside bomb in Afghanistan. He has a Purple Heart emblazoned on his artificial eye. He says the music has saved his life.

"I had a pretty bad traumatic brain injury, as well as the loss of my eye, and the music helps, just thinking and coordination and putting two words together," he said.

"The music is not just mental therapy, it's physical therapy," said Martin.

"It's everything," said Cawthorn. "Emotional therapy, physical, whatever you can think of. It's the best."

The best turned out in force for Wednesday night's Stand Up for Heroes concert at Madison Square Garden.

Who better to sing Pink Floyd's "Comfortably Numb" ("I hear you're feeling down, I can ease your pain, and get you on your feet again") than the wounded warrior band.

And who better to sing "Hallelujah" than Tim Donley:

"Maybe there's a God above,
But all I've ever learned from love
Was how to shoot at someone who outdrew you
It's not a cry you can hear at night
It's not somebody who has seen the light
It's a cold and it's a broken Hallelujah."

"I thought I understood it," Donley told Martin, "but next thing you know, my whole life is coming down around my ears. Every dream, every hope I've ever had for the future is broken around me, and I don't know where to turn, and it was that place that God said, 'Do you still trust me? Do you still believe that I have what's best for you?'

"And it was at that moment that I understood 'Hallelujah.'"

Donley laughed: "I may be more whole now than I've ever been in my life."